Absolut's #SexResponsibly Campaign Is Bold, Given Alcohol's Role In Assaults 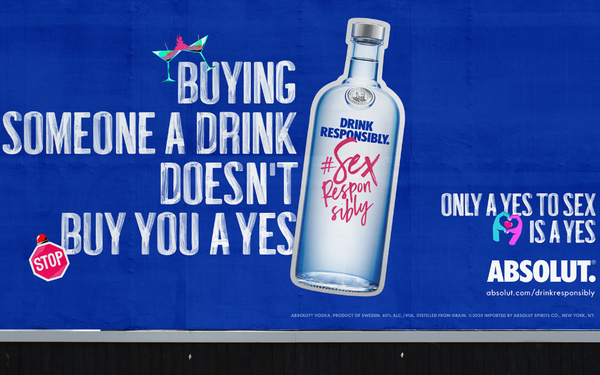 On Valentine's Day, when romance and sex are probably more top of mind than usual, Absolut Vodka is launching  “Drink Responsibly. #SexResponsibly”-- a campaign with the message that  “Only Yes to Sex Means Yes.”

A new Absolut print ad reads, in part, “Making out in a cab doesn’t make it a Yes” and “A date doesn’t always end with a Yes.” And, in a pointed dig at liquor's reputation in this area, the ad also says, “Buying someone a drink doesn’t buy you a Yes.”

The campaign will show up in out-of-home, print, digital and social advertising, and online ads featuring influencers.

This is mostly news because the message comes from a vodka brand.  Witty poet Ogden Nash nearly a hundred years ago wrote, “Candy is dandy but liquor is quicker" -- though in those more-innocent days, he was obviously referring to seduction, not assault.

These days, fact, alcohol is the most common drug involved in nearly half of all sexual assaults, with alcohol use by the attacker and/or the victim, reports the U.S. Department of Health and Human Services.

"In a recent survey conducted with 21- to 30-year-olds for Absolut by KRC Research, we learned that nine in 10 have talked about consent with their friends and family, and that nearly one-third said they talk about the topic of consent frequently or all the time," said Ann Mukherjee, chairman and CEO of Pernod Ricard North America, in a statement.

"Additionally, 61% said they believe companies should play a role in tackling this issue. When you pair that data with the startling reality that every 73 seconds, an American is sexually assaulted -- frequently involving the perpetrator's misuse of alcohol -- you can understand why we feel compelled to take a stand on the issue of consent," she added.

The effort is being launched in conjunction with RAINN, which says it is the nation's largest anti-sexual-violence organization. RAINN operates a 24/7 hotline at (800) 656.4673 and website online.rainn.org, for anyone affected by sexual assault.

Absolut’s message is on social media and says it will donate $1 for each time the post is shared with others. The brand has also made an initial donation to support RAINN's work, and Mukherjee will become a member of RAINN's National Leadership Council on behalf of Absolut.

A spokeswoman for Absolut says it is  “committed to working with others -- from brands to industry and nonprofit partners.”

Still the campaign is hitting a problem that can be awkward for makers of alcoholic beverages.

"This is a bold move by Absolut,” said Scott Berkowitz, RAINN’s president, “They contacted us and showed us their concepts and we liked the direction they were headed. They say they want to do more with us, and now we’re in the process of thinking about what that could be.

“But obviously, it’s really a personal cause to the CEO.”

For years now, beer makers have urged partiers to choose a sober designated driver, and “Drink Responsibly” is a common caution in ads and on packaging.