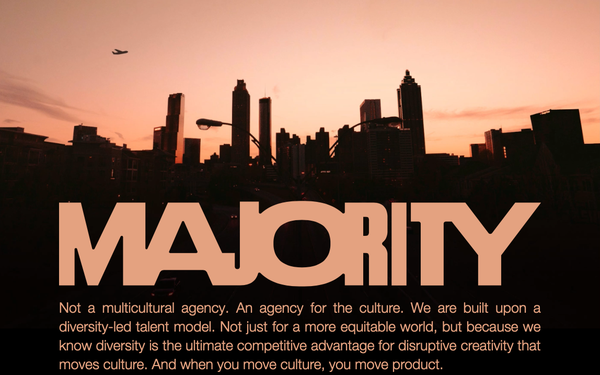 What do brands get when signing on with the creative advertising agency co-owned by NBA legend Shaquille O'Neal? A talent pool that's "75% black, brown, woman and LGBTQ," the agency's cofounder and CEO Omid Farhang told the Wall Street Journal.

The plan is to hire a diverse talent pool and show how creative output changes when “you flip that ratio," he said.

The agency, Majority, aims to "ignite diverse live experiences into cultural disruption that can take many forms." Some of those include advertising, strategic planning, digital, branded entertainment, design, product innovation, experiences, art and activism.

Majority, born this year in Atlanta and founded in partnership with veteran marketers Jorge Hernandez, and Asmirh Davis, isn’t the only agency spin this year to focus on diversity.

Diversity becomes a competitive advantage in 2021. I’ve heard that from more than one ad executive in the past year, not just in creative agencies, but in search, performance and other areas.

An American Association of Advertising Agencies (4As) report published in September shows Black and African-American employees make up 5.8% of the agency business, and of that portion 68% held administrative or entry-level roles.

The study looks at 165 agencies representing more than 40,000 employees. It also found 8.7% of the sample identified as Hispanic or Latino.

Of the agencies that took part, 75% are a part of holding companies, while 25% work at independent agencies across media buying, creative, account services and other roles. In terms of gender, 59.5% of employees are female, while 40.5% are male.

Farhang in 2018 created a monthly podcast, hosted on iTunes, in which he links to from the agency’s new website. The podcast series, Talking To Ourselves, features Farhang speaking with industry leaders like Guy Shelmerdine, Luke Sullivan, Charisse Hughes and others.

Majority first clients include delivery app goPuff, according to one report.

Most recently, Farhang served as chief creative officer at Momentum Worldwide, part of the McCann Worldgroup family of agencies. He began his career at Crispin Porter+Bogusky, where he was the youngest Creative Director in the agency’s history, and spent two years at Creative Artists Agency (CAA) building branded entertainment properties for clients including General Motors, QVC and Diageo, and talent clients including Lorne Michaels, Mike Krzyzewski, and ZZ Top.