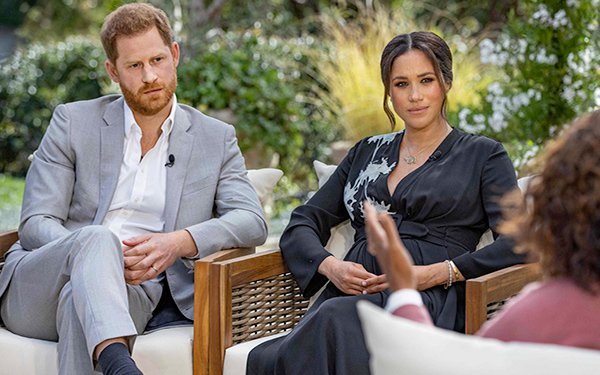 Oprah Winfrey's headline-making two-hour interview with the Duke and Duchess of Sussex on CBS on Sunday night pulled 17.1 million viewers, according to Nielsen fast national ratings.

The word "Meghan" trended in the top 10 in the U.S. for 12 hours, peaking at #1. #OprahMeghanHarry, Archie, Kate, Charles, Diana, William and Royal also trended within the top 10.

The special was CBS’s most-live-streamed event to date outside of the NFL and Super Bowl Sunday this season.

Capitalizing on the show's draw to drive app downloads, CBS is making it available to stream free, on demand, on the CBS app and CBS.com -- although not on its much-publicized new streamer Paramount+.  (See today's Video Insider for more on that.)

The special is set to air in the U.K. on Monday, but most British tabloids have already covered its content on their front pages, based on watching the U.S. airing that started at 1 a.m. in Britain. News Corp.'s The Sun live-blogged about the interview.

The interview also dominated online news channels and radio stations, including the BBC, overshadowing news including U.K. schools reopening and the National Health Service running out of money to treat COVID patients, according to WWD.