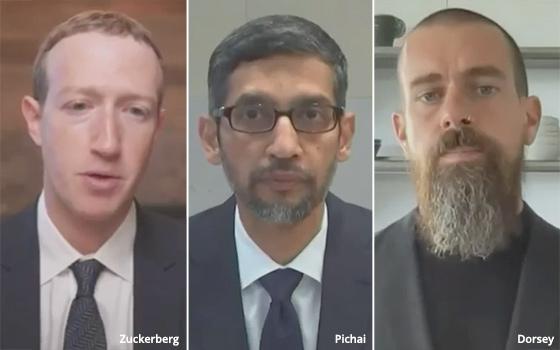 Democratic and Republican members of the House Energy & Commerce Committee grilled the CEOs of Facebook, Google and Twitter for answers on Thursday to a variety of questions, such as whether they believe it is a good idea to make changes to Section 230 and whether they believe kids spend too much time in front of screens.

Under certain conditions, the Section provides immunity from civil liabilities for information service providers that remove or restrict content from their services they deem "obscene, lewd, lascivious, filthy, excessively violent, harassing, or otherwise objectionable, whether or not such material is constitutionally protected."

Robert Latta, Rep. Congressman from Ohio, asked Facebook CEO Mark Zuckerberg to cite specific changes that he supports for Section 230. Zuckerberg said the big platforms need to issue transparency reports that state the prevalence of content across all harmful categories such as child exploitation, terrorism, incitement of violence, intellectual privacy violations, among other issues.

When asked to whom the reports should be sent and how often they should be released, Zuckerberg said companies should be held accountable to have systems like Facebook, which already identifies this type of content quarterly.

The second change that Zuckerberg proposes is for companies to have systems in place to moderate and remove illegal content such as sex trafficking and child exportation.

“I think it would be reasonable to condition immunity for the larger platforms on having a generally effective system in place to moderate clearly illegal types of content,” Zuckerberg said.

Zuckerberg has said in the past that if a specific piece of content evades this detection the platform should not be held accountable, placing the responsibility on the technology.

Latta then asked Google CEO Sundar Pichai whether he agreed with Zuckerberg’s recommended changes to Section 230.

“Those are definitely good proposals around transparency and accountability,” Pichai said. “We would welcome legislative proposals in this area.”

Pichai said there are many laws today that hold platforms liable.

Twitter CEO Jack Dorsey said he believes the ideas around transparency are good, but it will be difficult to differentiate between small and large platforms.

Tim Walberg, Rep. from Michigan, asked whether these platforms should be the arbiters of truth as they have been classified under Section 230.

Zuckerberg said it’s good to have a law that allows platforms to moderate content, but it would be beneficial to have more accountability and transparency.

Dorsey said he didn’t think platforms or the government should be the arbiters of truth, but he does believe that we need more transparency around content moderation and not just policies. He said the real issue is algorithms, more choices and transparency.