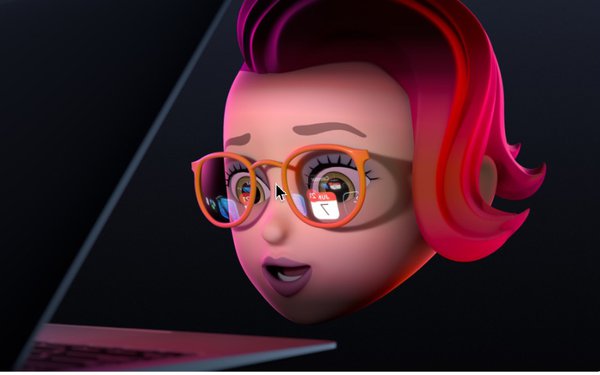 Apple just scheduled its always anticipated annual Worldwide Developers Conference for June 7 through 11 -- but an accompanying graphic in the announcement gave some Apple watchers a possible clue to what’s cooking at headquarters in Cupertino.

At the top of the document was the illustration of a young woman or girl staring into a half-closed laptop. The potentially newsworthy detail is that she’s wearing a pair of glasses with no side stem. Unusual! Significant?

The Verge website jumped right in, noting that details of the conference itself were typically “opaque” but said “there might be a tantalizing hint: is the memoji character’s glasses simply showing a reflection from their laptop? Or could Apple finally be gearing up to announce its long-rumored VR headset and AR glasses?”

Engadget’s bit of tech Kremlinology was even more detailed, pointing out the memoji looked as if it were referencing an unintentionally hilarious YouTube video by Apple’s vice president of engineering.  “Everything in the image is positioned to look like a reference to a Craig Federighi meme that made the rounds after last year's WWDC,”  the story said, and the reflection captured on eyeglasses seemed like it “might be a hint that we'll get our first glimpse at Apple’s wearable Glass in a few months.”

On Twitter, a pile of tweets quickly pointed the same way. “Apple’s#WWDC21 announcement went out and the Memoji’s are wearing glasses…hmmm”” tweeted a fellow who identified himself as a podcaster for StarWarsNewsNet. Many tweets followed, picking up the same clue that Apple would use the WWDC event to announce it, whatever, exactly, it is. Something to do with virtual reality.

CNET  recently compiled a kind of chronology of published rumors about Apple’s purported virtual reality and/or augmented reality headsets being in the pipeline. Those are to be followed by smart glasses, coming…..well, soon.

Marketing Daily asked Apple to respond to the rumors, but has gotten no response.

The WWDC is where Apple often makes major software and sometimes hardware introductions and is a big deal for computer tech expert.  In the past, tickets to the show were sold for as much as $1,599 each and sold out in hours, or even minutes after they went on sale. Last year, and again this year WWDC will be a virtual event because of the pandemic.

This year, Apple said,  “Free for all developers, WWDC21 will offer unique insight into the future of iOS, iPadOS, macOS, watchOS, and tvOS.” No mention of AR or VR or glasses at all. But don’t be surprised.