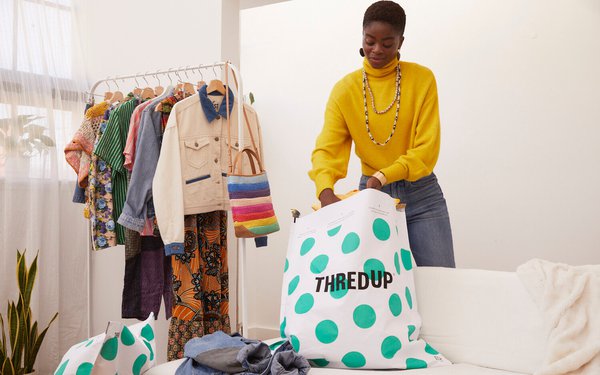 A new study shows that the resale shopping bug shows no sign of slowing and is spreading well beyond the young fans of sites like ThredUp, Poshmark and the RealReal.

Almost half­ -- 48% -- of all Americans shopped resale during the pandemic, especially intensifying their spending on home décor.

This research, from mobile marketplace OfferUp, in conjunction with Global Data, finds that home product sales had the fastest growth, up 17%, with 35% of those in its survey saying they shopped for such items.

That includes a scramble for the furniture that emerged as quarantine must-haves, such as desks, which were the most-searched-for items for four months straight. Home workout equipment also dominated searches and sales, with OfferUp detecting a 231% jump in demand for weights, a 152% rise for dumbbells and a 127% increase in interest in treadmills from January to December.

Analyzing metrics from its 56 million buyers and sellers, OfferUp also found that 58% did at least some level of redecorating. Many made their nests more comfortable, with significant increases in sales of beds, sofas and rugs. Others went for function, adding items like room screens and desk chairs.

The company also says 11% of Americans moved due to the pandemic, with 35% of those nomads transitioning to suburbs. About 40% say they moved to get more space, which also spurred more furniture purchases.

OfferUp, which also owns Letgo, is based in Seattle.

Surprisingly, the survey found that clothing resale fell 13%, as interest in workwear and fashion declined. But there were some significant exceptions. And many -- including investors -- expect that decline in clothing resales to change. Shares of ThredUp, which had its initial public stock offering recently, climbed as much as 43% on its first trading day. With the IPO, the thrift-store-turned-tech-titan raised $168 million, achieving a valuation of $1.3 billion.

Rival Poshmark, which made its public debut several months ago, saw its stock price doubled on the first day.

While both companies report growing sales, it’s clear all this working from home is altering the way people shop. Poshmark released quarterly results earlier this month, its first report since going public. And while revenue for the period grew by 27% to $69.3 million, the company lowered its sales estimates in the coming quarter.

In an interview with CNBC, Poshmark’s CEO attributed the scaled-back hopes to ongoing COVID restrictions. “Different parts of the country are behaving quite differently,” said founder and chief executive officer Manish Chandra. He told CNBC that sales in Florida are growing fast while New York is lagging. “So, we are accounting for the state-wide differences.”

And at the RealReal, which focuses solely on luxury consignment, revenue also declined 10%, to $84.6 million.