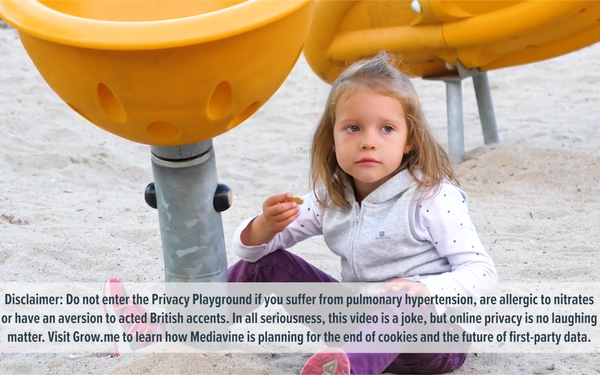 Fourth-party cookies are the future. What could be more fundamental than making privacy extinct? No more walled gardens. No more third parties. No more gatekeepers.

The video from Mediavine, published on Thursday, was intended to be an April Fools' spoof on the privacy challenges that advertisers address today with Google’s Cohort and Apple’s Identifier for Advertisers (IDFA).

After all, the World Wide Web was founded on the right to be free, according to Mediavine.

That’s the premise of the full-service ad management platform’s April Fools’ joke, which it played on customers on Thursday.

Mediavine introduced its Privacy Playground, a place the provides universal access to everything for any interested party. The video introducing this April Fools concept talks about providing full transparency and democratization.

“In the privacy playground, personal information soars,” says the narrator. “broken free from the cage of encryption, Mediavine is leading the revolution evolution that will transform the internet into a nonsecure, non-regulated utopia.”

“Fourth-party cookies are coming and they are the future,” the video’s narrator said.

Many brands backed out of April Fools’ jokes this year, including Google, but that didn’t stop companies like Ola, a ride-hailing company in India, from launching a video and building a website to check consumer interest on an autonomous flying car it calls Ola Air Pro. If nothing else they gained brand recognition.

Volkswagen’s April prank also got people talking. The company published a press release announcing that its U.S. operation would change its name to “Voltswagen,” stating a commitment to making electric cars.

Keogh was quoted in a joke news release talking about the change that appeared on Volkswagen’s U.S. communications website Tuesday. He told The Wall Street Journal that “If there’s any trust or credibility to be rebuilt from me, I’m going to do it.”