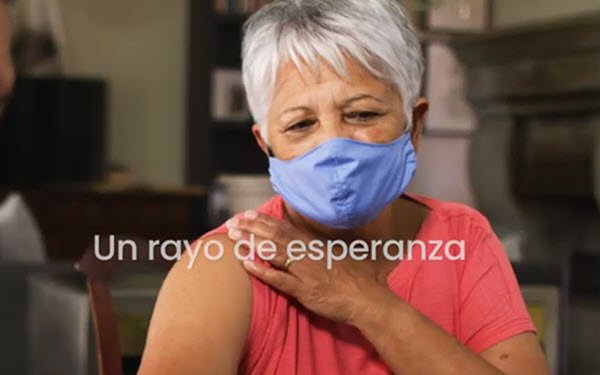 On Thursday, the U.S. Department of Health and Human Services began rolling out a new campaign to persuade more Americans to get the COVID-19 vaccination.

The effort includes $10 million for airing four new ads on cable and broadcast TV networks and Black and Spanish-language media platforms this month, according to CNN.

The campaign, themed “We Can Do This,” stresses that vaccinations represent the key to Americans being able to reclaim their lives.

One of the ads is Spanish-language (above) and another, narrated by Henry Louis Gates Jr. (below), is targeted to the Black community. (All of the ads can be viewed on HHS’s YouTube channel.)

In total, Congress allocated $1 billion to government efforts to promote the vaccines as part of the new, $1.9-trillion pandemic relief bill passed by Democrats.

The groups include many chosen to appeal to conservatives, such as evangelical Christian and veterans’ groups and NASCAR, per CNBC.

The groups, dubbed the “COVID-19 Community Corps,” are being armed with information and resources to convey the safety and efficacy of the vaccines.

Surveys have shown that Americans rely most on their doctors and community leaders in deciding whether to be vaccinated.

HHS and the U.S. Centers for Disease Control and Prevention are also creating Facebook profile picture frames that can be used by people who have been vaccinated to encourage friends and families to do the same. HHS said that Facebook has agreed to promote the picture frames and encourage influencers to employ them.