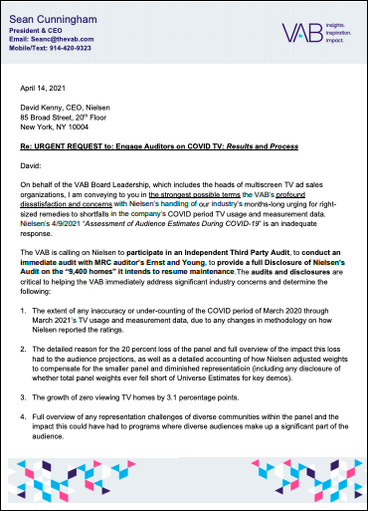 With the upfront advertising market set to begin in a few weeks, the VAB, the TV network advertising trade group, sent a letter to Nielsen asking it to submit to an immediate audit of its practices -- which includes “under-counting” of viewership and lack of “maintenance” of Nielsen TV panel homes during the COVID-19 pandemic period.

Writes Sean Cunningham, president-CEO of the VAB, to David Kenny, CEO of Nielsen on April 14:

“The VAB is calling on Nielsen to participate in an independent third-party audit, to conduct an immediate audit with MRC [Media Rating Council] auditor’s Ernst & Young, to provide a full disclosure of Nielsen’s audit on the 9,400 homes it intends to resume maintenance.”

Nielsen suspended maintenance on much of its total 40,000 TV panel during the pandemic period of March 2020 through March 2021. Nielsen said it has resumed maintenance efforts.

Cunningham then lists a number of issues the audit would help address, including “inaccuracy or under-counting” of viewers in the March 2020 through March 2021 period.

The audit would also help explain why there was a 20% loss of Nielsen TV households panel, and why the number of “zero TV homes” -- those which showed no TV viewing whatsoever -- grew by 3.1 percentage points in the period.

Cunningham also requests a full overview of challenges concerning “diverse communities” on the panel -- Black, Hispanic and Asian homes, as well as viewers under 35.

In addition, he calls for a “set of market-facing numerical adjustment factors” to be applied to usage and measurement to correct the under-counting of TV viewers. Over the past 12 months, TV network viewing has declined more sharply than in previous years, taking on steeper double-digit percentage declines.

“The timely intervention of a third-party, independent auditor can act as a fair arbiter in assessing the accuracy of Nielsen’s Covid period TV ratings currency data,” says Cunningham.

In picking MRC’s auditor Ernst & Young, the VAB says it “identified a highly appropriate, impartial and extremely well-qualified independent auditor from a small pool of candidates.” The Media Rating Council is a nonprofit organization that manages accreditation for media research and rating companies.

The VAB asks for a response from Nielsen by April 19. In its letter, the VAB points to immediate action, as the $20 billion TV upfront advertising marketplace is set to begin in a few weeks (see related story).

Nielsen responded to Television News Daily with this statement: “Nielsen is committed to providing reliable and accurate data to the media industry. We received VAB's letter, and we are in the process of evaluating our next steps.”