Snapchat parent Snap, which derives nearly all of its revenue from advertising, saw revenue rise 66%, to $770 million, in this year’s first quarter.

The quarterly gains in revenue and DAU were the platform’s largest in three years. (See trends charts below.)

The company’s advertising program innovations and new partnerships have attracted new advertisers, as well as revenue, with its active advertiser base in Q1 more than doubling year-over-year — and Snap is projecting continued growth in 2021 and beyond, said Chief Business Officer Jeremi Gorman.

“Our work with brands over the past year has resulted in upfront commitments for our commercials ad format from our brand advertising partners more than tripling year-over-year for 2021” to date, he said. “We'll be doubling down on our outreach to video advertisers in just a few weeks when we present at the annual NewFronts conference to further capture the opportunity we see in video advertising,” he added.

For example, Yoplait participated in the platform’s CPG Fast Track program, designed to prove short-term sales lift for advertisers who hadn't previously invested with Snapchat, Gorman said. “Their campaign leveraged Snap Ads and Lenses, which resulted in new buyers driving nearly 30% of incremental sales, and exposure to their Sponsored Lens driving over 40% of incremental sales,” he reported.

Some traditionally strong categories — including theatrical films — are also returning after reduced spending during the COVID-19 pandemic. Although Snapchat is starting to pursue categories where user interest is high, it has not had a large presence to date, such as travel and leisure, he said.

North America — where Snapchat boosted investment in sales and sales support over the past 18 months — is its fastest-growing market as well as its largest revenue producer. N.A. revenue was up 75% versus Q1 2020 to $553 million, although it was down from Q4 2020’s $659 million.

“We also have a lot of room to grow in some of the world's most established advertising markets outside of North America,” added Gorman. “For example, in the countries that comprise over half the world's digital ad spend, Snapchat reaches 70% of 13- to 34-year-olds.”

Consumers’ greater use of ecommerce and brands’ accelerated AR learning curve and use of AR products for ecommerce, including its sampling and try-on capabilities, were a key revenue driver.

Going forward, one of Snapchat’s goals is “to combine AR experiences like fit and try on with personalization and customers' preferences to vastly improve the shopping experience, while driving purchases and reducing returns,” Gorman said. “We believe we’re going after a large opportunity: 94% of people are expecting to use AR for shopping the same or more in 2022 versus 2021, according to a study we commissioned with Deloitte.”

To drive advertising growth, Snap will look to efficiently scale its sales and marketing to support international advertisers, as well as continue to invest in its ad platform and optimization to improve relevance and deliver measurable ROI, and build innovative, performance-based video and AR ad experiences, Gorman said.

“We believe firmly in performance-driven advertising, and continue to scale our measurement tools and goal-based bidding [GBB] capabilities that allow advertisers to optimize for the objectives they are trying to achieve,” he said. “We continue to see over half our revenue come from direct response campaigns.”

Year-over-year revenue more than tripled from Snapchat’s Pixel Purchase GBB and from its Subscription GBB, and nearly doubled from its Pixel Signup GBB, Gorman reported.

“In addition, as advertiser demand and diversity grow, we can serve more relevant ads to each Snapchatter,” improving advertiser ROI, he said.

Retailers can use Snapchat’s Dynamic Ads to run ecommerce campaigns that are automatically optimized across their catalogs, he noted.

Snap supports Apple’s opt-in/app-tracking transparency changes, and is testing Apple’s SKAdNetwork with advertisers. In fact, advertisers that generate most of Snap’s direct response advertising revenue have already successfully implemented the technology on their Snapchat campaigns, according to Gorman.

“Beyond that, we are currently designing an array of privacy-centric solutions, both short- and long-term, to ensure we deliver a privacy-first experience for our community and best-in-class offerings for our partners,” he said. 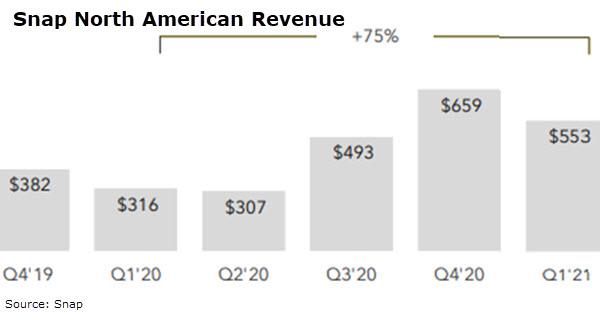 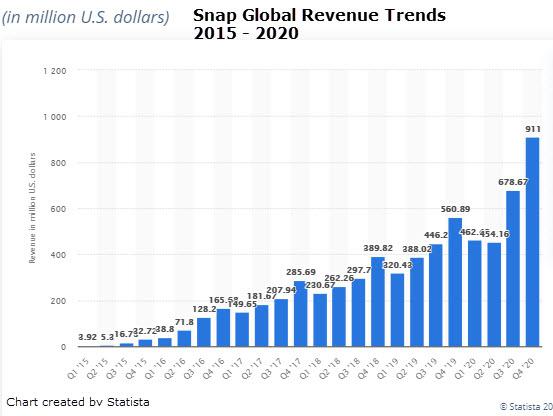