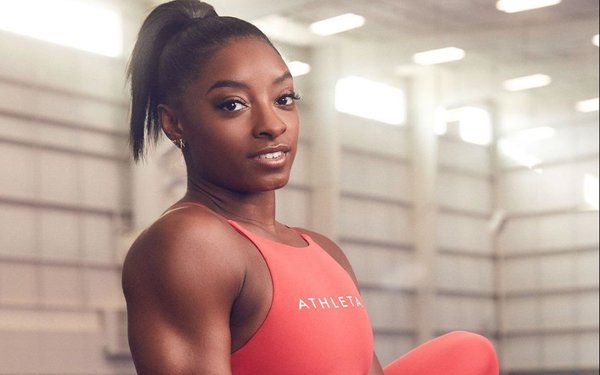 Gymnastic superstar Simone Biles is bailing on Nike, signing a new agreement with Athleta, the Gap-owned women’s athletic brand. The deal calls for Biles to help the $1 billion brand in “fostering community, igniting activity and inspiring the next generation to be the best version of themselves.”

The news comes at an exceptionally high-profile moment for the 24-year-old. If the XXXII Olympic Summer Games go off as planned this summer -- something that's still not a given -- odds are good she’ll deliver more riveting performances. She is reported to be ready to pull off yet another signature move, this one a vault. And she’s also favored to bring more medals home for USA Gymnastics. She’s already the country’s most decorated gymnast, and the third most decorated in the world.

Biles tells The Wall Street Journal why she made the move: "I felt like it wasn't just about my achievements, it's what I stood for and how they were going to help me use my voice and also be a voice for females and kids. I feel like they also support me, not just as an athlete, but just as an individual outside of the gym and the change that I want to create, which is so refreshing."

The endorsement coup also comes at a high-profile moment for Athleta. At the moment, it’s the highest performing brand at the Gap.

In its fourth-quarter results, released last month, the San Francisco-based company says total sales for Athleta increased 29%, with comparable sales up 26%. With product launches that include sleepwear and inclusive sizing, it’s gaining brand awareness: new customer acquisition increased 70% versus last year. It surpassed $1 billion in sales for the full year, with a 16% annual sales growth.

With just 200 stores, Athleta does much of its business directly with consumers. And it’s clearly gaining on rival Lululemon, which also keeps sharpening its D2C edge.

Losing a star so close to the games is not great news for Nike. While Biles’ statement did not reference Nike at all, it’s been called out repeatedly for the way it treats women athletes. In 2019, Olympian Allyson Fenix signed with Athleta after splitting with Nike over its policy to cut payments to athletes who became pregnant.

While Nike amended its policy after the backlash, it continues to be the target of criticism for its treatment not just of athletes but of women employees. Last month, it announced that it would begin linking executive compensation to progress in diversity and inclusion goals for the first time.

And last week, Vanessa Bryant, widow of Kobe Bryant, announced that the Nike/Bryant partnership had expired.

A Nike spokesperson tells The Wall Street Journal there are no hard feelings for the loss of Biles.  “Simone Biles is an incredible athlete and we wish her the very best,” the report says, and “we will continue to champion, celebrate and evolve to support our female athletes.”