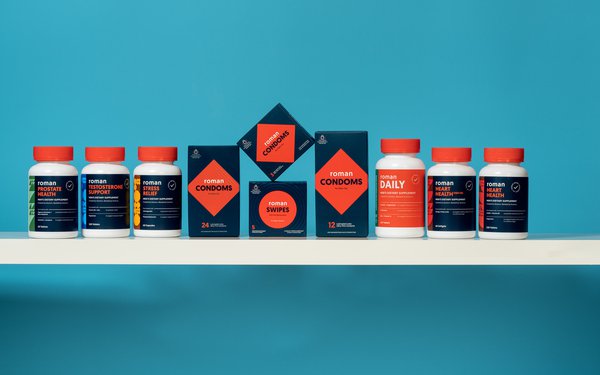 Roman, which helped pioneer the D2C health category with prescriptions for men’s sexual health, is moving into Walmart. This is the company’s first retail collaboration, placing its products in 4,600 stores. It represents not just a shift in its product line, but a change in marketing.

“We want our products to be available in every channel you can think of,” says Rob Schutz, co-founder and chief growth officer of Ro, the parent company. “Walmart is an extension of that marketing strategy. To be available in thousands of Walmarts? That’s the best billboard we can have.”

“This is such a unique opportunity for us because there’s so much good overlap.”

The company is set to offer a range of vitamins that support heart health, stress relief, testosterone support and prostate health and a multivitamin, as well as Roman Swipes and condoms. But it also gives customers an introduction to the brand and its use of telehealth services for medications requiring a prescription.

Roman started in 2017, as a new D2C way to sell medication for hair loss and erectile dysfunction. Ro also offers Rory, which sells products for women.

Since its founding, Ro has facilitated more than six million digital healthcare visits. And with the explosion of telehealth since the pandemic, consumers have become increasingly comfortable with alternative ways of accessing healthcare.

“We are at this interesting interaction of telehealth and retail. We’re essentially a vertically integrated primary care platform,” Schutz tells D2C FYI. “We work with a national physicians network and now go into homes with phlebotomists and nurses.”

But the Walmart deal means it will be better at “meeting people wherever they are in their healthcare journey, whether they find us through content or in the aisles of Walmart.”

Schutz says the new effort will go a long way toward reducing the stigma around men’s sexual health, a goal that has been essential to the brand since it launched.

Schutz, who held a similar role at Bark before joining Roman, doesn’t think branching into retail makes sense for every D2C brand.

“I often hear people say, 'Retail distribution is now table stakes for D2C,’ but it has to be done in a thoughtful way,” he says. “For Ro, it makes sense. And for many, it can build awareness, reputation, legitimacy and trust. But the unit economics and business strategy have to support it, and that’s not true for many D2C companies.”

In its latest funding round, Ro reached a valuation of $5 billion.

Correction: An earlier version of this story misstated Ro’s valuation.