Are Apple App Users Half Empty Or Half Full? (Depends On Who You Talk To) 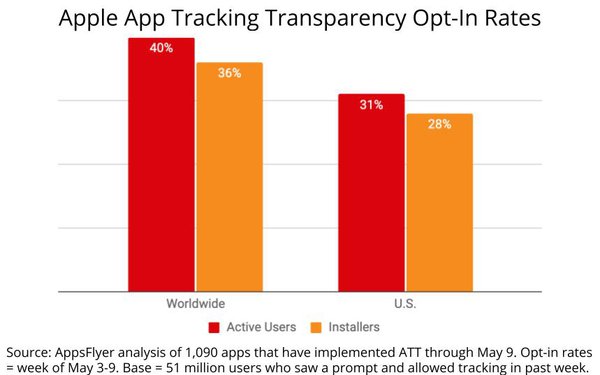 A couple of weeks into Apple's enforcement of its new App Tracking Transparency framework, it doesn't appear to be the dire situation some had anticipated. Or maybe it is? It all depends on who you speak with.

A weekly analysis of Apple app developers that have begun implementing the prompts for active users and/or new users installing, suggests it's not as if consumers are abandoning tracking on a wholesale basis.

Based on the most recent week of data (ended May 9), 40% of active users and 31% of new installers have opted into having their data tracked on apps running on Apple's iOS 14.5 version.

While there's some concern for U.S. mobile advertisers -- the numbers fall to 36% and 28%, respectively among U.S. active users and installers -- it's not the falloff some (especially Facebook) had been predicting.

It's unclear from the data why users would or would not allow tracking after being notified, but if you look at the app category data, it appears to be a function of what the apps actually do for them. While most app categories have close to the overall opt-in rates, the rate for social media app users skews much lower, which I suspect has to do with overall perceptions of individual user privacy as it relates to social media.

While the AppsFlyer tracking seems robust and solid -- it's based on an analysis of more than 1,000 apps that have implemented Apple's ATT and 51 million users who saw their prompts and allowed their data to be tracked -- there is some other data floating around that suggests it could be worse.

In particular, there was an article by Inc. columnist Jason Aten citing data from Verizon Media's Flurry analytics platform indicating that only 6% of users have opted in so far.

That's quite a range, but I don't have access to the Flurry database, so I can't vouch for it.

The big question, however, is how Apple app user behavior changes over time. I'm pretty sure that will have something to do with the nature of the apps they are installing, and whether it inherently makes sense for them to track their users' data, or whether they provide other incentives.

The best example I can give for this is a navigation app: If you don't allow your data to be tracked, there's no way a navigation app can help you figure out where you want to go.

analytics, apple, apps, data, digital, mobile
1 comment about "Are Apple App Users Half Empty Or Half Full? (Depends On Who You Talk To)".
Check to receive email when comments are posted.
Next story loading