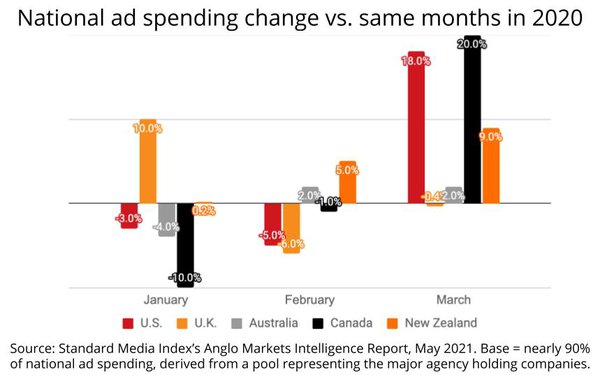 The major Anglo markets -- and the U.S. in particular -- appear to be leading the global ad economy out of recession, according to an analysis released Thursday by Standard Media Index.

The analysis, which is based on a pool of data of actual ad spending representing nearly 90% of the national marketplaces for five Anglo markets -- the U.S., the U.K., Australia, Canada, and New Zealand -- shows they expanded 4% during the first quarter compared with the same quarter in 2020, which included the beginning of a global ad recession that was triggered by the economic effects of the COVID-19 pandemic beginning around March 2020.

"Given the level of economic disruption from the COVID pandemic, it’s phenomenal to see such a positive increase in advertising expenditure back to pre-COVID levels even before the global pandemic has been arrested,’’ SMI James Fennessy noted, adding: "It clearly highlights the resilience of the advertising industry in these key markets and points to a healthy future for all ad-supported media.’’

The next few months will reveal just how sustainable the ad recovery is, and early next week, SMI and MediaPost will provide the first early look for April in the U.S., when we update our U.S. Ad Market Tracker, an index based on the U.S. portion of SMI's agency pool (see below).