Only One Upfront Had TV's Man Of The Hour: David Zaslav 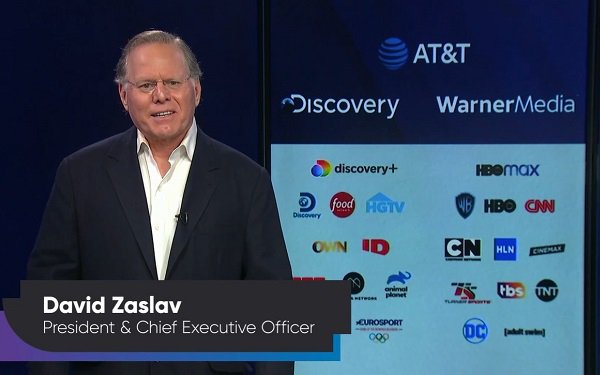 Like all upfront presentations, the upfront events being held virtually this week have a lot of moving parts -- new-show announcements, celebrity appearances, pitches to the advertising community, and so much more.

But only one of this week’s upfront events can boast that it featured TV’s Man of the Hour (for this week, at least), Discovery Inc. President and CEO David Zaslav.

He is credited with choreographing this week’s blockbuster deal in the television business in which the media properties of Discovery Inc. and WarnerMedia will be "combined" (the word used in the companies’ announcement on Monday morning) into a movie and video content juggernaut.

And guess who will be in charge of this new combine? David Zaslav. As a result, he and Discovery had more than the usual story to tell when he appeared at the outset of the company’s virtual upfront Tuesday morning.

Positioned alongside a chart of Discovery and WarnerMedia assets, Zaslav (pictured above) opened the Discovery upfront with a brief statement about the news that broke some time on Sunday and was then officially announced Monday morning.

For the record, a very comprehensive press release from both Discovery and WarnerMedia parent AT&T arrived in my email inbox at 7:18 a.m. (eastern time) on Monday.

Not being one to pay particular attention to business news on Sunday, I had no inkling of it on Monday morning when I first unfolded my Wall Street Journal and saw that it was the lead story. About five minutes later, the press release came.

I loved the timing. Here was this industry-shaking business deal making headlines just at the start of upfront week when it would certainly draw the attention of media reporters and columnists away from the upfronts (and all the other TV companies), at least in part.

“This part of the upfront presentation was not planned,” said Zaslav in the introductory segment that did indeed feel tacked on to the start of the upfront. “But in light of the news of yesterday, I want to thank all of you for joining us on Day One of Discovery’s new adventure.”

If David Zaslav is this week’s Man of the Hour, then Discovery is the TV Company of the Hour. Despite that, Tuesday morning’s Discovery upfront was understandably focused almost entirely on Discovery, and certainly not on the properties of WarnerMedia that it will soon control.

In fact, the deal is apparently so new that there is not even a name for the combined company. And since the deal is far from complete, Discovery’s upfront sales efforts will go on as planned. And so will WarnerMedia’s. That company’s upfront is scheduled for today, Wednesday.

In his remarks at the start of the Discovery upfront on Tuesday, Zaslav connected the new deal he had just made to the audience he was addressing. “[The newly combined Discovery and WarnerMedia] will create a unique entertainment company that will enthrall audiences on every screen, every platform and in every country around the world,” Zaslav said

“It is so fitting that I am able to talk to you today because we would not have reached this point without you, our partners in every sense of the word,” he said. “And now, we get to write our next chapter together.”

As if this blockbuster deal was not enough, more news about Zaslav popped up in my email inbox on Tuesday afternoon reporting that Discovery Inc. had extended Zaslav’s contract through 2027. Previously, it was set to expire in 2023.