Why Public Safety Should Be The Next Big KPI For Media

Last week, the Association of National Advertisers released a new report ranking the usage and importance of the major KPIs -- or “key performance indicators” -- the world’s biggest marketers utilize to measure the value and results of their media buys.

Fittingly, “brand safety” metrics rank near the top, just behind metrics measuring the return on investment and/or ad spending, and just ahead of customer lifetime value.

Coming after a year in which advertisers appeared to have grown more of a sense of public responsibility, I take this as a good sign that the ad industry is growing more of a conscience about its role in the greater world. But it doesn’t go far enough.

I think it’s time for Madison Avenue to develop a new set of metrics -- public safety ones -- that measure the direct and indirect roles of their ad spending on society at large, not to mention the physical health of people and the planet we live on.

I’ve been think about this for some time, because I’ve watched how the ad industry has gotten behind and backed so many “next new things,” some of which had unintended consequences that -- had we had the foresight -- maybe the ad industry wouldn’t have pushed in the first place. Digital platforms -- especially socially media, and especially Facebook within it -- comes to mind. But now, as advertisers consider the next newest thing, I think it might be an excellent time to stop and think about the longer term implications of it.

I’m speaking about new and emerging blockchain-enabled technologies, especially various forms of cryptocurrencies, as well as a new class of media assets known as NFTs, or non-fungible tokens.

Like cryptocurrencies leading up to them, the NFT market appears to be incredibly bubblish, but it’s not the market implications of them that I am most concerned about.

It’s okay with me if investors want to make or lose fortunes betting on the long-term value of things with largely extrinsic value. I mean, after all, a big portion of the value of most great brands is goodwill, right? Nothing wrong with perceived value -- when you can back it up with some intrinsic attributes.

What I’m concerned about now is the long-term environmental impact of NFTs, and the as-yet-not-yet-conceived new media assets that will likely follow them, because of their impact on the environment.

Indeed, it was Elon Musk expressing second thoughts about -- and selling off Tesla’s big position in -- Bitcoin that sent its value plummeting (down about 50% from its 12-month high).

I’ve been studying blockchain for years now, and trying to understand its potential impact on Madison Avenue, but as brilliant as the concept of an open, distributed ledger is for potential markets, I just haven’t seen its real utility in advertising and media-buying.

It’s not suited for programmatic media-buying, which has far too many permutations to apply blockchain, and attempts to “tokenize” media-buying, or even consumer attention, have largely failed.

Now, as NFTs capture the imagination of the media, collectors and investors alike, I would recommend that the ad industry take a breather and think about what the long-term impact is of helping to jumpstart an industry that can have long-term consequences.

I was struck by this when Fox Entertainment, as part of its upfront advertising pitch, announced it was launching a NFT business that would create a new class of digital media assets, including “blockchain creative ads,” whatever that is.

I give Fox credit for being the first to get out in front of NFTs, and trying to figure out how to create a business around them that will generate new value for advertisers and viewers, as well as new revenues for Fox. I just think we should pause and think about what the long-term impact will be before its too late. 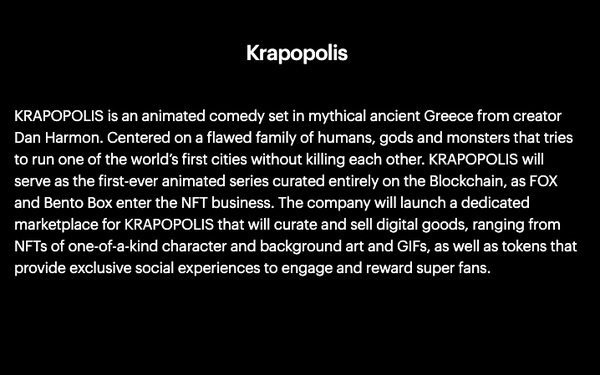