What's In A Name? The Stuff That Dreams Are Made Of 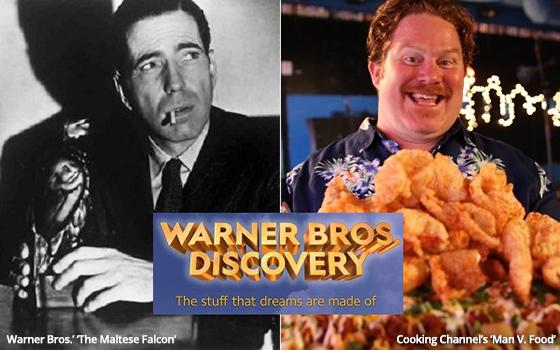 The many challenges of how to name a new company formed by the combination of two well-known existing ones are summed up in Discovery Inc.’s decision to rename itself Warner Bros. Discovery.

The questions that arose in the brainstorming sessions that produced this name may have included: Whose name goes first in the new, combined moniker -- the old Warner Bros. name representing a 98-year history in the creation of entertainment content, or Discovery, a basic-cable brand born in 1985?

Or should this new company combining the entirety of Warner’s scripted content (thousands of movies and TV shows) with Discovery’s vast unscripted holdings be renamed entirely, without having to coordinate and choreograph a combination of the two existing names?

If these issues were among the topics on the table at the renaming meetings, then the choice obviously was the first option -- simply combine the two company names and, voila!, you get Warner Bros. Discovery. The new name was announced on Tuesday.

The billing is interesting, though, for several reasons. For one thing, since the Golden Age of Hollywood, top billing on a movie has represented the ultimate in hard-won status and recognition for the industry’s biggest stars and directors.

By placing “Warner Bros.” before “Discovery,” are the coiners of this new corporate name telling us that the Warner Bros. properties are “top-billed” in this partnership?

And secondly, placing Warner Bros. in the first position in the new name belies the fact that Discovery is taking over WarnerMedia, not the other way around.

The opposite took place when Viacom re-merged with CBS. Viacom got the first position, as in ViacomCBS, even though it can be argued that CBS was the better-known of those two name-brands -- at least to the public and “end-users” of their product (i.e., television shows).

It is taken from “The Maltese Falcon,” released by Warner Bros. in 1941. If memory serves, it is the last line spoken in the movie.

Humphrey Bogart (as the detective Sam Spade, pictured above) utters it when San Francisco Police Det. Tom Polhaus (Ward Bond) picks up the falcon statue and asks: “What is it?” To which Sam Spade famously answers, “The stuff that dreams are made of.”

The quote does not appear to be in the book by Dashiell Hammett (at least not at the end of it in any case, since I checked the last few pages). Its placement in the movie was likely the invention of John Huston, who wrote and directed it.

For the record, it comes to “The Maltese Falcon” via Shakespeare. “We are such stuff as dreams are made on,” says Prospero in “The Tempest.”

As a slogan for the new Warner Bros. Discovery, its message is more or less obvious. This giant content company traffics in the production of movies and TV shows that are the stuff of dreams.

It is a generality that is apparently meant to encompass all of the content of Warner Bros. and Discovery, a vast variety of styles and forms that is nothing if not wide-ranging.

The photos above were intentionally chosen to illustrate the wide range of offerings this new company will now control.

In the photo on the left (compliments of TCM), Humphrey Bogart dreamily contemplates the Maltese Falcon. On the right, host Casey Webb of “Man V. Food” on the Cooking Channel apparently “dreams” of consuming that entire tray of food that he is leering over.

The “stuff of dreams”? Sure, why not? If they had to choose a quote for a slogan, “The stuff that dreams are made of” is more on-target than “Here’s looking at you, kid” or “What’s up, doc?” And it is definitely better than “That’s all, folks!”