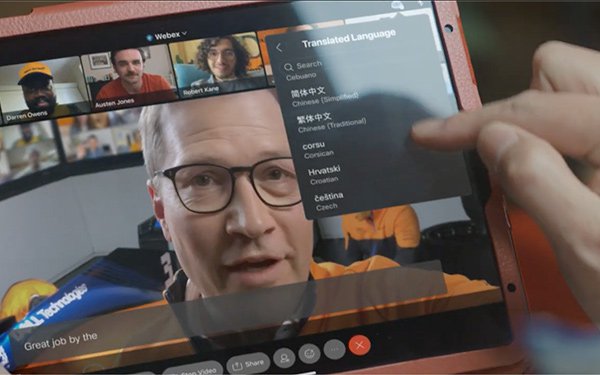 Looking to capitalize on -- and broaden its appeal in -- a pandemic work-at-home era, Cisco is relaunching an expanded version of its big Webex video-meeting platform with a broad-based marketing campaign.

Positioning itself under a new category umbrella -- Hybrid Work -- Webex will incorporate its key video meeting functions as well as messaging, calling, polling and event functions.

“Our goal is to change the perception that Webex legacy is just about meetings,” Aruna Ravichandran, Cisco vice president-CMO for Webex Collaboration Marketing, told Television Daily News. “We are going to target both the consumers and IP practitioners.”

The long-time video platform -- now 25 years old -- will offer an expanded Webex Suite via a marketing campaign -- its biggest ever, according to Ravichandran. It targets corporate staffers, entrepreneurial at-home workers and consumers.

New Webex features include a language translation tool, which offers real-time caption translation of more than 100 languages, as well as customizable video backgrounds, a noise-cancelling feature, and “gesture” recognition tool. “Without speaking, it will automatically recognize that I’m doing a particular gesture,” Ravichandran says.

Perhaps, more importantly, Ravichandran says the company has improved in a key area  -- the quality of its video. Among other things, it has been criticized for being too “grainy.”

“We were not focused on end users -- and that is rightfully correct.” She adds that its high-profile competitor, Zoom, for example, placed sizable efforts around its video quality.

“The feedback we got was that our media sucked. We listened and we responded. We have invested massively. We now [have seen] an unbelievable increase with respect to our quality.”

All this looks to build on Webex's existing strong marketplace -- especially among paid video subscribers.

While business marketing efforts will be a key focus, so will consumer marketing. Webex will have influencer campaigns on Tik Tok and Instagram, as well as paid-social media campaigns on Facebook.

Ravichandran says a new Webex brand graphic riffs off a combined image symbolizing a DNA/rotating helix — two hands coming together. “Everything we do has to embody inclusivity,” she says.

One of its biggest collaborations, a co-branded TV commercial with McLaren, the Formula One racing team, uses Webex for all its internal needs. The Webex brand is also featured on its race cars.

The TV media plan has commercials featured on CNBC, CNN, HGTV, the Food Network, Major League Baseball, the NBA, and other networks, as well as digital/streaming video platforms, such as YouTube and Roku.

In print, it is taking out a full-page ad on the back page of The Washington Post, a co-branded McLaren effort with the message “Driving Hybrid Work.”