Netflix Starts E-Commerce Online Store For Products Based On Its TV Shows, Movies 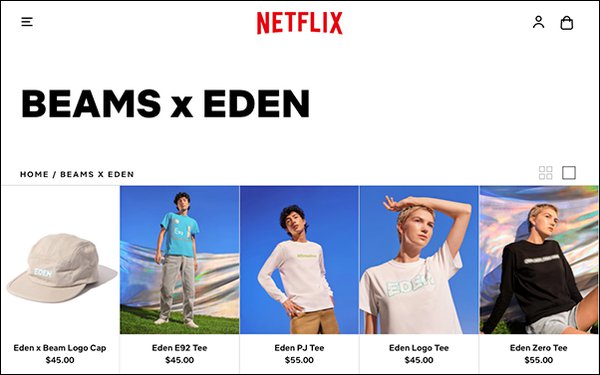 Netflix is starting up an e-commerce site -- the Netflix.shop, an online store selling exclusive limited-edition products based around its shows and movies.

Josh Simon, vice president of consumer products, in a Netflix blog post on Thursday, said: “We’re always looking at how we can extend the world of our stories for fans, from apparel and toys to immersive events and games.”

First up are some apparel and action figures based on the anime series "Yasuke" and "Eden.” “Decorative items” will connect viewers to Netflix's "Lupin" -- a French-based mystery TV series. The products are made in collaboration with the Musée du Louvre in Paris.

The Netflix.shop will also sell Netflix logo clothing made by Japanese fashion house Beams. Other Netflix-linked merchandise will riff off original programs including "The Witcher" and "Stranger Things."

This is similar to what many legacy TV companies --- NBCUniversal, Walt Disney, and others -- have done through the years with their TV and movie content.

A year ago, in April 2020, NBCU expanded its e-commerce efforts beyond the straight selling of TV show-related products.

NBCUniversal Checkout allows businesses — local or national, traditional, new or existing and direct-to-consumer — the ability to set up ecommerce business. If TV viewers or media users see a product in or around its content, they can click and buy it.

Last month, ViacomCBS Networks International struck an agreement with Japan-based Rakuten Group for its video streaming platform as well as for its e-commerce platform, Rakuten Ichiba.

For ViacomCBS’s Nickelodeon brand, Rakuten will create the first-ever digital storefront in Asia for the kids-based TV network/platform.