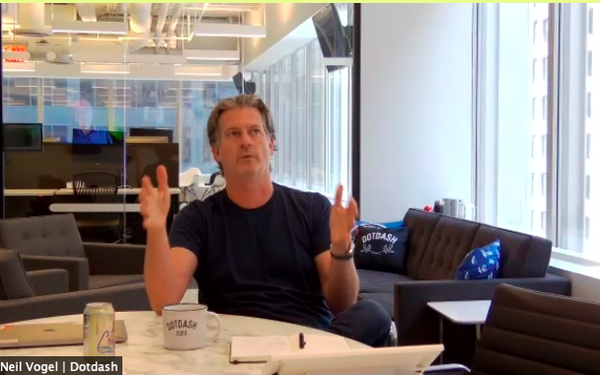 At a time when the ad industry appears to be re-embracing contextual targeting as a solution for the deprecation of cookies and various other identity trackers, Dotdash is succeeding by focusing on delivering “need to know” content for consumers looking for answers to critical life and lifestyle questions online.

That -- not algorithms or “hacking” social media platforms like Facebook and Pinterest -- is what has driven the growth of the IAC division, which publishes an array of vertical interest sites focusing users’ special interest needs, CEO Neil Vogel explained during a keynote conversation with MediaPost’s Steve Smith, opening Day One of the Publishing Insider Summit Thursday.

“It’s 100% contextual,” Vogel boasted, adding, “If every cookie disappeared and never came back it would be great for us.”

The conversation, which took place on Zoom as part of the first of MediaPost’s hybrid events since the pandemic began, was coupled with physical events taking place for attendees at Pinehurst resort in North Carolina.

The strategy, which in some ways is a return to its About.com roots, is working because of its focus, Vogel said, noting that the goal is for each of Dotdash’s verticals to publish only the best possible advice-based content in each of the subject categories it competes in, or not even bother with the subject.

“If we don’t think we can make the single best thing on the internet about that topic, we don’t make it,” Vogel said, citing an example of a recent lifehack published by The Spruce, on the best way to fold a hooded sweatshirt.

“That’s one I did and I’m proud of it,” Vogel boasted of his personal content contribution. The strategy is working he said, because The Spruce now generates more than 30 million monthly uniques, according to Comscore, and competes with a legendary legacy brand like Good Housekeeping.

While the strategy has enabled Dotdash to expand its revenue streams into affiliate marketing sales, as well as creating its own retail products -- sold in Home Depot and on QVC -- he said the main focus is on conventional advertising sales, and that it is winning by being 100% agnostic to the “ad stack,” including embracing programmatic, as well as direct selling.

“People run away form the open market if they have ads that don’t perform,” Vogel said about the chip many publishers have about open RTB on their shoulders. “We treat the open market like another viable demand source in your stack. Why wouldn’t you?”

And while the company invests in optimizing the algorithmic ranking potential of its content in search and on social media sites, Vogel said the No. 1 focus is on the quality -- and context -- of its content.

“We’re not hacking anything,” Vogel clarified, emphasizing, “We look at every single piece of content on the internet and make sure ours is better. We probably invest more in content than any other publisher we can find.”

As proof that its strategy has been working, Vogel noted that its revenues have growth from about $70 million “five years ago” to $225 million in 2020.

And as MediaPost’s Steve Smith noted during his intro, Dotdash also added 200 employees and is looking to recruit 80 more.