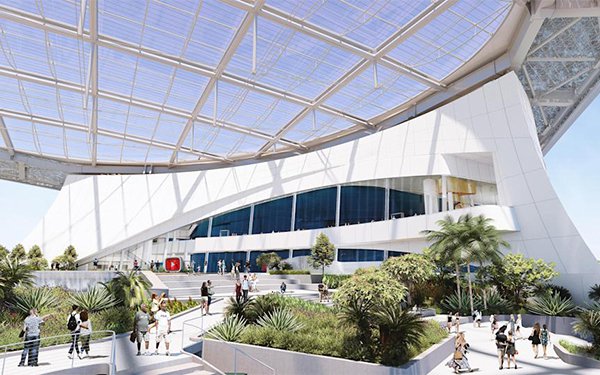 YouTube has gained its first naming-rights deal, a 6,000-seat performance venue at the Hollywood Park sports and entertainment complex in Inglewood, California. It will be called YouTube Theater, and is scheduled to open this summer with a full lineup of yet-to-be-announced events.

With the deal, Google Cloud is the exclusive cloud partner of YouTube Theater as well.

The theater will host a variety of live entertainment events. Hollywood Park and Live Nation have partnered in an exclusive multi-year booking agreement and have already confirmed Caifanes, Los Angeles Azules, Pitbull, Black Pumas, Devo, Trippie Redd, Alejandro Sanz, Christian Nodal, Marina, and Louis Tomlinson to play shows at the theater in 2021 and 2022.

The theater focuses on interactivity, including a large-scale digital YouTube play button icon outside the venue, which can transform into an immersive video screen that guests can interact with by mirroring themselves on the screen and by viewing highlights of YouTube’s creator and artist content.

The venue also features a dynamic digital wall on the interior that will be used to celebrate YouTube creators and artists by showcasing them in a gallery-like setting.

Microsoft also has a venue in Los Angeles.