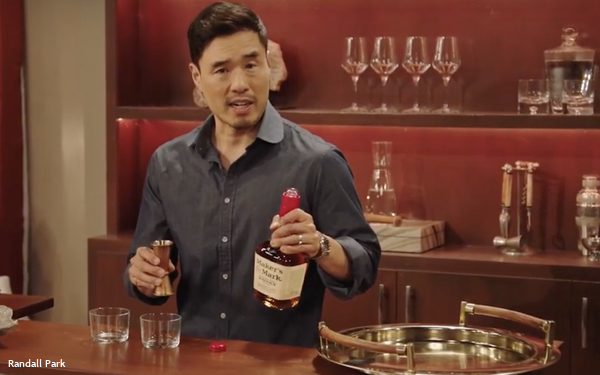 Shot at a poolside Los Angeles villa, the participants are seated beside a customized Grey Goose case that features three items -- each of which represents a moment in the guest's career. Then host and athlete reveal the items one-by-one, discussing the significance of each “as they sip their favorite cocktails… from a specialty bar cart.”

"Our hope is the personal stories shared throughout ‘In The Moment’ will encourage audiences to foster a deeper connection with these icons and gain a deeper understanding of not just their game, but also their passions outside of sports," said Aleco Azqueta, vice president North America Marketing, Grey Goose.

The brand is also making a donation to nonprofits selected by each athlete.

“In the Moment” can be seen on Grey Goose’s YouTube channel, and the brand said it is also available on a dedicated Roku channel.

Episodes, set in Randall’s “living room,” begin with him crafting a cocktail during an opening monologue, followed by “interesting conversation, fun games, and more than a few laughs.”

“'The Show Next Door' is the embodiment of what we call Maker’s Hour – the much-deserved time you decide to make for yourself,” said KK Hall, global senior marketing director, Maker’s Mark.

Brian Toombs, head of content, Roku Brand Studio, called the show “an incredible example of moving beyond the traditional 30-second ad and creating a fun and uplifting comedy.”

“The Show Next Door” is streaming for free on The Roku Channel, which viewers don't need a Roku device to view, and on Maker’s Mark social channels.

Roku Brand Studio, announced at the Newfronts in May, launched its first series last month: “Roku Recommends,” whose sponsors include Walmart.

Roku noted that its Measurement Partner Program allows brands to quantify how their integration “reaches SVOD-only streamers, adds incremental reach to their video ad campaign, shifts perceptions of their brand, drives consumers into stores/websites, or moves product off the shelf.”