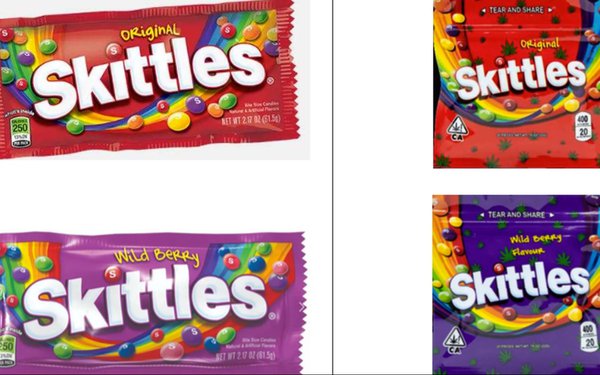 Meanwhile, Mars Wrigley has sued several companies this year for their use of the names Zkittlez, Medicated Skittles, Life Savers Medicated Gummies and Starburst Gummies.

In the Cointreau suit, the company alleges that Canopy has infringed on the world-famous Cointreau trademark—which for 170 years has represented a “unique orange liqueur.”

The suit indicates that Cointreau plans to expand into such beverages as flavored waters, sodas and ready-to-drink cocktails, as evidenced by the company’s U.S. trademark registration for those products.

According to Cointreau, “[Canopy’s] willful actions will not only confuse consumers as to their affiliation with Plaintiffs and the COINTREAU brand, but will blur the exclusive association Plaintiff enjoys between COINTREAU and a single source of orange liqueurs.”

Cointreau contends that CBD beverages sold at bars, restaurants and lounges “are frequently ordered by voice alone, and aural similarity in the names of products is likely to lead to confusion.”

For each of the past three years, Cointreau has spent more than $15 million annually to promote the brand in the United States.

Marketing Daily reached out to Canopy for comment but had not heard back by deadline.

In May, Mars Wrigley filed suit against California-based Terphogz LLC for using the brand name Zkittlez and allegedly “knocking off” the Skittles “Taste The Rainbow Slogan” on Terphogz’ cannabis products.

Mars Wrigley sought a permanent injunction on the sale of products with the Zkittlez name and logo. It also requested control of the website zkittlez.com.

One of the websites named in the suit, GasBuds, has allegedly sold Medicated Sour Skittles. Marketing Daily reached out to GasBuds for comment but had not heard back by deadline.

According to attorney Fred Rocafort of the Harris Bricken law firm, the cases involving Zkittlez and the Skittles brand names fall into two camps.

“THC edibles that bear the SKITTLES mark clearly have no place in our marketplace (at least not until Wrigley decides to enter the cannabis space!),” Rocafort wrote on the firm’s Canna Law Blog.

“However, when it comes to products like Zkittlez, courts must be careful not to set precedents that have an excessive chilling effect on creative branding, unduly expanding the protection enjoyed by companies such as Wrigley.”