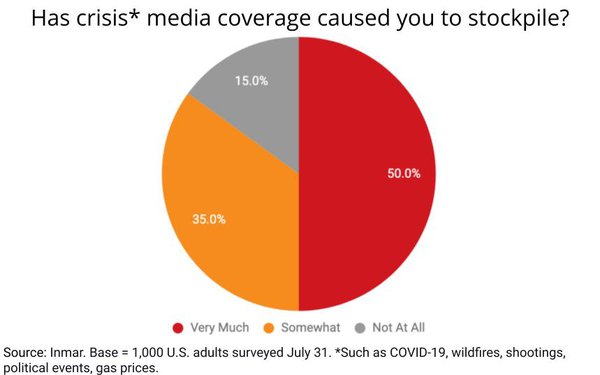 The press are often criticized for overplaying societal crises, but one of the unintended consequences of the U.S. media's coverage of so many recent major crisis events is that it has driven many Americans to stockpile products they might not otherwise have.

Nearly two-thirds of U.S. adults surveyed by consumer promotions analytics and processing firm Inmar say they have stockpiled as a result of press coverage, including 50% who say it has been a major influence on their stockpiling behaviors.

The survey, which was fielded July 31, is part of Inmar's second consumer stockpiling report, release this week, which also finds that three-quarters of Americans continue to see product shortages while shopping, and 69% plan to stockpile more products due to explicit concerns about the COVID-19 Delta variant.

Asked which products they plan to stockpile, toilet paper remains No. 1, followed by paper towels, disinfectants and canned goods (see below).