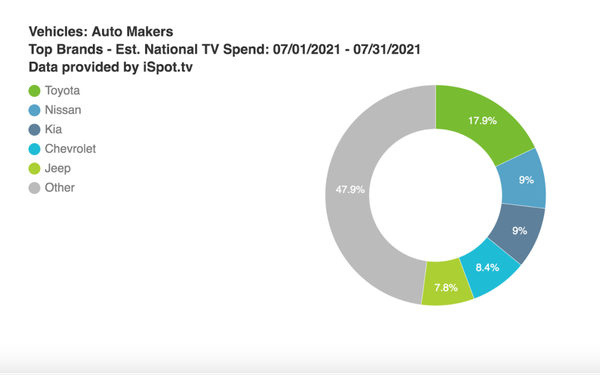 Automakers increased their spending on television media last month, largely thanks to the Olympics, according to iSpot.tv.

In July 2021, automakers spent an estimated $164 million according to iSpot -- an increase of nearly 60% year-over-year.

"With so much live sports on TV in July, automakers took full advantage of those tentpole events to get new messaging in front of large audiences," Stuart Schwartzapfel, senior vice president, media partnerships at iSpot.tv, tells Marketing Daily. “At this point in the calendar, these brands are both trying to move 2021 inventory and pivoting to 2022 vehicle stock, so what better place to pursue those goals than major events like the Stanley Cup Final, NBA Finals and Olympics?”

Nearly 48% of Toyota’s national TV ad spend during the month went toward the Olympics, with another 24% dedicated to the NBA Playoffs and Finals as the brand went all-in on prime-time sports programming, per iSpot.tv.

For Chevy, sports were a big part of national TV ad spend (over 87%), but over 33% of impressions also came from local advertising.

Broadcast networks (both English and Spanish-language) accounted for nearly 30% of impressions for auto brands in July, per iSpot.tv.