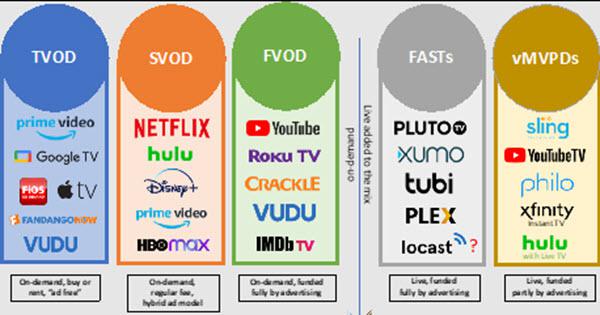 The wide world of ad-supported streaming platforms continues to grow and evolve.

Nearly a quarter of these households (24%) use such a service daily, 32% weekly, and 44% use one on a monthly or less frequent basis.

Three-quarters (76%) of these users report watching YouTube — which has more than twice the audience of its closest competitors.

And here’s an eye-opener: In Q2, YouTube generated as much ad revenue as Netflix did subscription revenue.

However, asked about the role of free ad-supported streaming services within their households’ total TV viewing, just one in eight Pluto and Tubi users say they use these services as their first choice for shows.

The report’s author, TDG Senior Analyst Doug Montgomery, points out that while there’s a “kaleidoscope” of formats and providers, three core revenue models are still in place: à la carte, subscription and free.

But he also points out that there is “widespread confusion” about the meaning of AVOD and its variations.

Little wonder. Take a look at the TDG graphic above, showing the options now out there — a veritable alphabet soup of acronyms.

Indeed, Montgomery argues that the term “AVOD” should be dropped in favor of the more accurate “ad-supported streaming video.” (Though he stops short of advocating yet another acronym... presumably ASSV.)

He points out that while the industry currently folds two streaming-video revenue models — FVOD (free video-on-demand and FASTs — under the AVOD umbrella, any streaming revenue model can in fact have an advertising component.

This means that advertising should be understood “not as a vertical but as a common revenue model that all verticals can leverage for revenue.”

He also points out that, just as with broadcast and cable, advertising-based revenue models span both on-demand and live (for instance, the FVOD IMDb and the vMPVD Sling TV), as well as transactional, subscription and free distribution models (for instance, the TVOD Vudu, the SVOD Netflix, and YouTube).

How many consumers understand all or even most of this? Does it matter?

At this point, most who have ventured beyond traditional pay and free TV have learned enough to find some combination of services that fits their needs. But that doesn’t mean that they might not be missing out on options and providers that might serve them better.