87% Of Gen Zs Confirm Increased Use Of Interactive Video 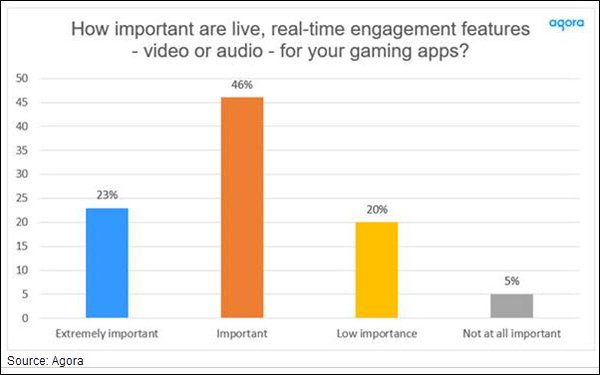 A new survey finds 87% of Gen Zs confirm that they have been using more mobile apps with built-in interactive video streaming or video-calling features over the past year.

The survey was conducted earlier this month among 1,000 Gen Z consumers, for RTE platform company Agora.

Nearly two-thirds (62%) of respondents said they had tried interactive live audio streaming apps over the past year, and 70% said that in light of COVID -19, they would prefer retailers to offer AR and VR tech in their apps to test and try products at home before buying.

Nearly half (46%) said that interactive video or audio are important for their gaming apps, and 23% deemed them extremely important (chart above).

In addition, 63% agreed that front-facing AR filters are key to keeping them interested in a social media app or service.

While commissioned by a tech vendor in the space, this survey’s results echo other research pointing to the Gen Z cohort’s craving for online interaction, including intimate connections made via “digital campfires.”