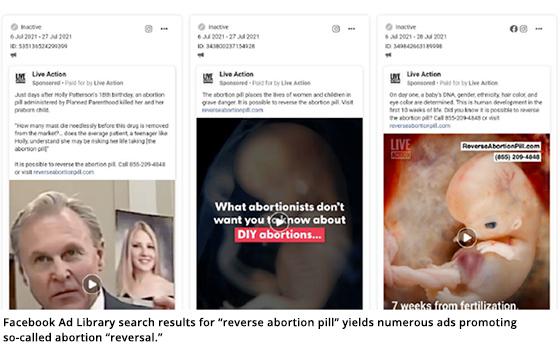 Facebook and Google profited from "abortion reversal" advertisements, according to a report by a nonprofit that strives to stop big tech firms from providing services to many that may promote hate and potentially dangerous misinformation.

The Center for Countering Digital Hate explains that Facebook has a feature allowing advertisers to target minors ages 13 to 17. It estimates that seven ads were viewed by minors more than 700,000 times.

Facebook does have a policy banning ads that promote "inappropriate, illegal, or unsafe" products and services to minors. The report estimates that advertisers have paid Facebook up to $140,667 to run these abortion reversal ads since January 2020.

A Facebook spokesperson told Insider that it removed many of the ads identified in the report, some of which were "inactive and months or years old," for "violating our policies around offering adult products and services."

A high percentage of Google searches using keywords like "unwanted pregnancy reversal pills" result in abortion reversal paid advertisements. The report estimates 83% based on a sample of 140 Google searches carried out across 14 U.S. cities.

In Google search, terms like “abortion,” “find abortion clinic near me,” “abortion pill,” and “abortion pill cost” were found in cities such as Denver, Salt Lake City, Los Angeles, Miami, Seattle, and many more.

The report notes that on Google the ads were collected using a Google form and assessed in a spreadsheet. Information recorded through the form included: browser, search URL, search terms, search location, advertiser name, ad URL, information from “why this ad?” drop-down menu and a screenshot of the ad.