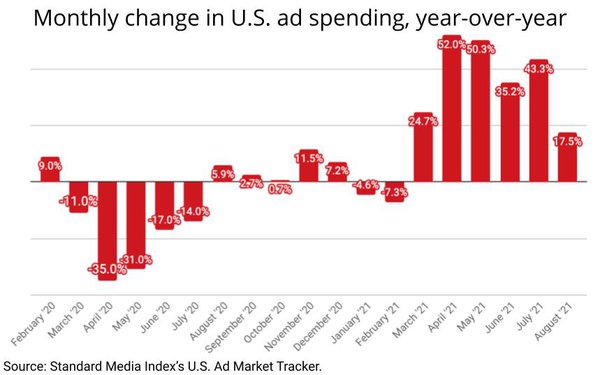 The expansion of the U.S. ad economy slowed to 17.% in August, the weakest growth in half a year, due to tougher comparisons with August 2020 -- which was the first month last year to show growth after the COVID-19 pandemic triggered an ad-spending recession.

Relative to August 2019, the U.S. ad marketplace is up 16.7% this August, according to a MediaPost analysis of the U.S. Ad Market Tracker, a collaboration of Standard Media Index and MediaPost based on actual ad-spending data.

While the ad market recovery has been erratic, and some are anticipating future slowdowns due to spikes of infections from the COVID-19 Delta variant, some leading indicators like robust upfront network advertising sales, suggest it might be sustainable.

That said, the national TV advertising marketplace fell 2.2% in August, which typically is a weak month for network TV advertising sales heading into a new season.

By comparison, the digital advertising marketplace remains very strong, expanding 35.6% in August vs. the same month in 2020.

Smaller advertisers continue to lead the U.S. advertising expansion -- with categories ranked 11th or smaller boosting aggregate ad spending by 27.7% in August, while the top 10 ad categories grew only 12.5%. 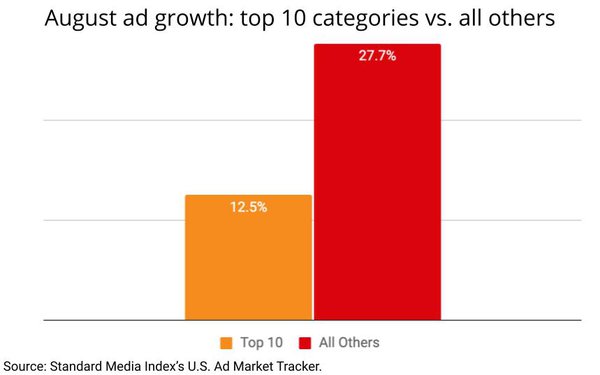