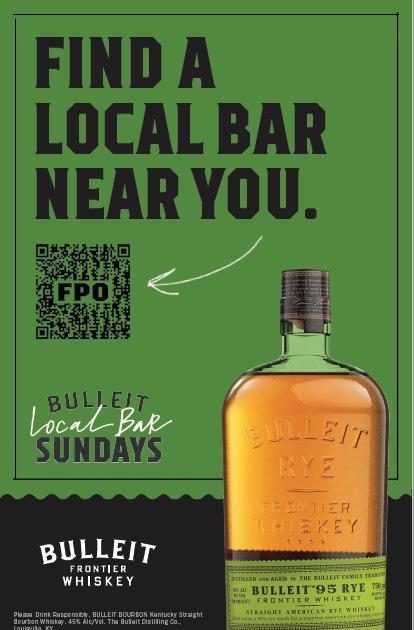 While the promotion suggests that consumers visit venues on Sundays, they actually don’t need to wait till then to buy any Bulleit-based drink, upload the receipt, and get reimbursed up to $10 via Venmo.

"Local bars and restaurants are a reflection of the vibrant and diverse communities they serve and have been the backdrop to some of life's most important celebrations," states Ricky Collett, global and U.S. brand director of Bulleit Frontier Whiskey. So the initiative aims to remind “consumers of the importance of supporting their local establishments and communities, by making every Sunday a Local Bar Sunday."

An initial, smaller version of Bulleit’s “Local Bar Sundays” had launched locally in New York in conjunction with the Tribeca Film Festival in June.

A year ago, the brand launched the Bulleit Frontier Fund to support bartenders, with an initial commitment of $250,000 to such organizations as The United States Bartenders Guild National Charity Foundation, Another Round, Another Rally and Southern Smoke Foundation, and its own national ad campaign.