Why Political Activism Will Be The New Brand Purpose 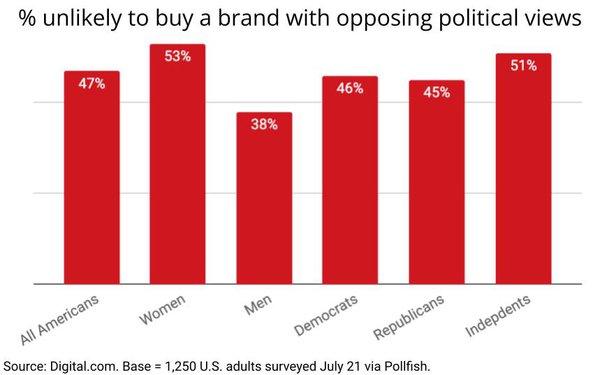 As far as epochs go, the past several years of multiple health, economic, social and political crises likely will impact consumer mindsets -- and marketing -- for some time to come.

But unlike previous game-changing historical events such as the Great Depression or World War II, this one is multivariate, ongoing and defies a single definition or identity.

Kantar Chief Knowledge Officer J. Walker Smith may have the best articulation of the shift in consumer mindsets that I’ve ever heard, describing them in longitudinal waves:

Consumers were already beginning to transition their brand expectations as the Millennium began turning, but it was a series of global crises -- first the Great Recession, and more recently the COVID-19 pandemic, and a wave of social injustice outrage sparked by Black Lives Matter and George Floyd’s murder -- that accelerated the shift.

The good news is that brand marketers have largely responded well, and data from Edelman’s periodic Trust Barometer shows that many consumers now trust companies and their brands more than they do other institutions like governments, the media, etc.

And you need only have attended this year’s Cannes Lions festival to know how genuine some of the world’s greatest brand marketing has been in addressing societal needs.

But I’m willing to predict that the new “brand purpose” will -- and needs to be -- “brand activism,” including the explicitly political kind.

Brand marketers already are straddling the political spectrum indirectly by taking a stand on social injustice, inclusion and equity, which a number of studies have shown already is triggering some partisan political divides among consumers.

Nearly half (47%) of consumers polled by Digital.com in July said they are “unlikely to buy products or services from companies not aligned with their political views.”

Interestingly, women skew that response, with 53% of female respondents supporting brands taking on a politically activist stance versus only 38% of male respondents.

“The top reasons that women consider politics when patronizing businesses are that they do not want their money to support causes they oppose, and they want it to have an impact beyond the purchase,” Digital.com explains in its report.

Another study released this week by the U.K.’s Data & Marketing Association (DMA) finds “nearly half of consumers (45%) would like to be able to filter products by the values that matter to them when shopping online, such as sustainability or localism.” The DMA’s findings were based on a survey of British consumers conducted in August, but I’m pretty sure they would hold up if fielded in the U.S.

Needless to say, political brand activism could be risky, and a slippery slope, because the minute a brand takes a political side on something, they will marginalize consumers with an opposing view.

So it’s a calculated risk, but the truth is very if any brands can be everything to everyone, anyway, and it’s more important that brand marketers stand up for and reinforce values, because in this next wave of consumer marketing, great brands have an opportunity to lead, not follow.

If you ask me, that IS the new brand purpose. Even if your brand is My Pillow Guy.