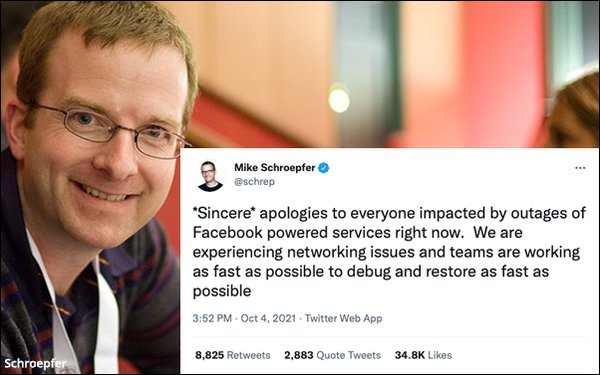 On Monday, Facebook CTO Mike Schroepfer tweeted an apology to everyone who has been impacted by the outages of Facebook-powered services. He wrote that Facebook, Instagram, and WhatsApp are experiencing networking issues, and teams are working to debug and restore the platforms.

The outage affects all Facebook-owned properties, according to data on Downdetector.

The Facebook platform as well as Facebook-owned platforms Instagram and WhatsApp running on the company’s servers went down earlier today and remain down worldwide. Users are running into blank screens or error messages when trying to log on.

The servers went down after whistleblower Frances Haugen -- a former Facebook product manager who amassed thousands of pages of internal research -- distributed them to the news media, lawmakers and regulators. The Wall Street Journal broke the story last week, citing documents gathered by Haugen that reveal Facebook knew of the many harms its services cause.

Security experts tracking the Facebook, Instagram and WhatsApp outages believe they could have been triggered by a configuration error that took the platforms offline. They could also be the result of an internal mistake. An outside hack is being viewed as less likely.

“It is rumored to be a Border Gateway Protocol problem," Forrester Principal Analyst Renee Murphy wrote in an email to Search & Performance Marketing Daily. "This is something worth noting. It might be really hard to get into a router and change the route tables from outside the organization, but inside, it's a piece of cake. ... This is not something that should ever happen at a company this sophisticated with this much data.”

Some suggested large swaths of code went missing and that Facebook would need to restore the platforms through backups.

Some Twitter users called the outage a convenience as the Senate prepares for special hearings on Tuesday with regard to Haugen’s testimony.

Fight for the Future director Evan Greer believes Haugen is correctly identifying surveillance-driven algorithmic manipulation as the root cause of Facebook’s and Instagram’s harms.

“It’s very difficult to directly regulate the use of algorithms to recommend content, but Congress can and should finally pass a Federal data privacy law, to end the data harvesting practices that power such algorithms,” per Greer.