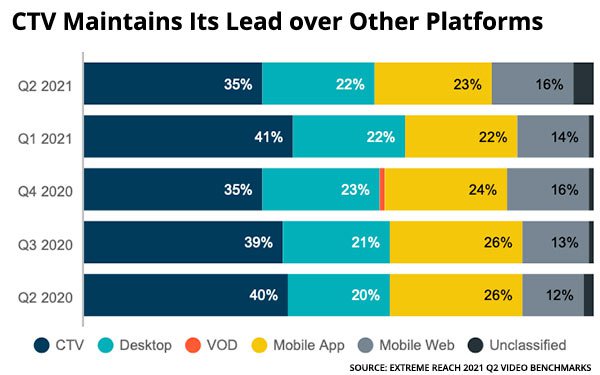 In January 2020, the MRC revoked accreditation of the Extreme Reach AdBridge platform, although no explanation was disclosed. Since then, the MRC has also reinstated Extreme’s desktop digital video impressions accreditation.

Extreme Reach’s CTV business continues to be a growing channel, accounting for 35% of overall digital video ad impressions in the second quarter of 2021. Since second-quarter 2020, the company says this has remained in the range of 35% to 41% of impressions served by the company.

In its “Video Benchmark Report,” the company reports industry-wide CTV impressions have grown three times larger in the second quarter of this year versus the same quarter a year ago.

With Extreme Reach. there are now eight ad-serving companies that have connected TV video impression accreditation from the MRC, including DoubleVerify, FreeWheel, Innovid, Moat, Pixelate, Protected Media and Hulu.