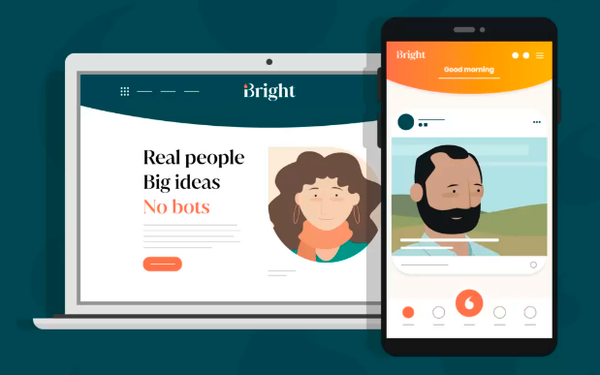 In what appears to be an industry first, a new social media network is launching with a bona fide system for filtering misinformation already built into it.

In a deal with NewsGuard, a misinformation ratings service sanctified by some of Madison Avenue's top agencies and trading systems, new social media network Bright will launch later this year in the U.S. and U.K.

While it's not the first time a new social media platform has been positioned around the notion of appealing to our, well, brighter sides, it likely is the first to do so with data that is explicitly intended to help its users avoid misinformation and engage with credible news based on data licensed from NewsGuard, which rates the veracity of information on thousands of news and information sites and has already been endorsed and integrated by IPG Mediabrands, Omnicom and Publicis, among others.

NewsGuard said the agreement with Bright is a straight licensing deal and that it has no financial interest in Bright, which promotes itself as a "happier" social network.

"Bright is a social app based on the idea that our members deserve to be happy, healthy, and safe online," Bright's pre-launch website touts, noting: "That’s why we don’t have ads, keep out bots, ban all trolls, fight fake news, and never ever sell your data to anyone. It’s time for a social network that treats you like you count, and not like a number."

If that copy sounds familiar, it's because it's not the first time social media platforms have been positioned as the anti-anti-social network, including ones that do not accept advertising.

In 2014, Ello generated a considerable amount of industry fanfare launching with that proposition, but ultimately failed to generate the kind of mass scale its supporters had predicted and was repositioned as a "creator's network."

Today, there are at least dozens of social networks operating on the model that they don't collect users' data, sell and/or use it to target or retarget them, including EyeEm, Friendica, Matrix, MeWe, Minds, Mastodon, Raftr, Signal, Sociall, Steemit, Telegram, Tox, Vero, WT Social, Yubo and Zom.

“We built Bright to be a platform that prioritizes trust, transparency, accuracy, and real human connections,” CEO and Founder Taryn Ward says in a statement announcing its deal with NewsGuard.