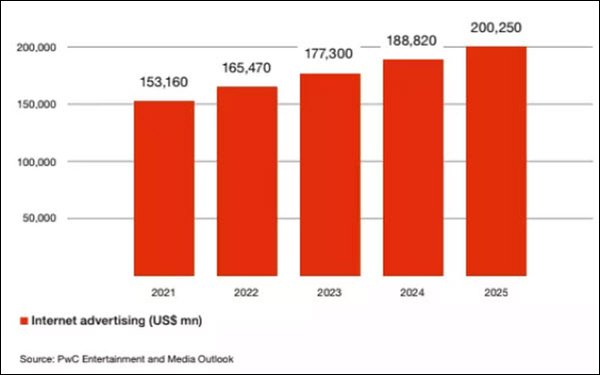 The outlook, based on a survey of nearly 20 buy- and sell-side industry leaders by PriceWaterhouseCoopers (PwC) and insights from other IAB research, forecasts digital ad spend to reach $165.5 billion next year.

The new outlook warns about several factors that could impede growth in those digital advertising channels, starting with consumers’ increasing aversion to irrelevant, one-way advertising.

“Waning consumer tolerance” and higher expectations for digital advertising “is impacting the composition and size of audiences of ad-supported media and entertainment brands,” states the report.

“Today’s modern consumer is fleeing bad ad-supported media experiences,” it adds. “For both buy-and-sell-side marketers, the consumer migration to ad-light and ad-free content offerings indicates an expectation that advertising delivers a useful and contextually relevant experience, and providing ways to easily and quickly engage (i.e., explore/transact) is demanded.”

Surveyed executives cited several changes that need to be made quickly in digital advertising practices, including more strategic selection of partners; delivering highly customized advertisements in the right context, with scale; developing new formats that let consumers explore and transact; and identification and measurement of relevant KPIs.

A section on M&As observes that the battle between AVOD and subscription video-on-demand (SVOD) is evolving.

“New crowdsourced and user-generated platforms challenge both established digital leaders as well as traditional media players,” it states. “The recent IPO boom has created opportunities for new entrants, which is expected to fuel a new wave of M&A.”

“Due to broader pressures on media and entertainment companies — including the need to deliver highly engaged and scaled audiences — the appeal of more robust and integrated experiences is expected to persist for at least the next few years,” it adds.

One executive is quoted as saying: “It’s not a matter of if the next big deal will happen, it’s a question of when.”

Other key digital advertising industry challenges include regulatory reforms in the data-collection/privacy area and changes needed to attract talent, according to the surveyed executives.

To address consumers’ increasingly negative perceptions about data collection, the industry “should be educating consumers about what their information is being used for and how it’s being used, allowing them to make the choices they deem best for them,” said one agency participant. “This should be the responsibility not only of advertisers, because they’re the ones using that information, but also data providers, whose business models include tracking consumers’ digital behavior, particularly shopping and spending habits, collecting and storing information.

On the talent front, companies may need to move away from heavy dependence on seeking candidates with traditional marketing education, as well as offer cultures that embrace diversity, equity and inclusion (DEI) values, the report stresses.

“As long as a person has certain universal intangibles, such as grit, a hard-working attitude and eagerness to learn a range of skills, degrees in marketing, advertising and related disciplines may not be relevant in the future workplace,” observed one publishing executive.