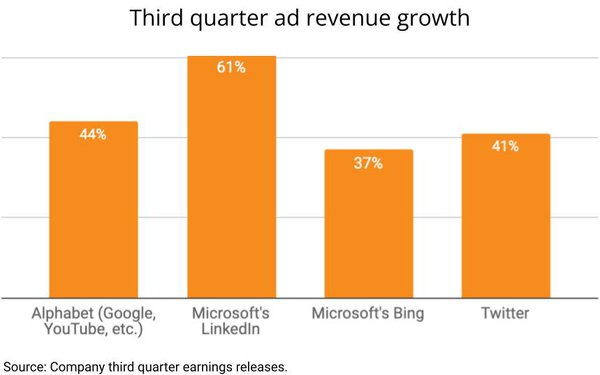 Evidence is mounting that two purported ad economy bogies -- supply-chain constraints and the continuing rollout of Apple’s iOS privacy framework -- are not having a material impact on ad-spending growth.

The latest evidence comes from three big digital ad companies -- Alphabet, Microsoft, and Twitter -- which each reported rapid ad-revenue growth during their third quarter-earnings releases Tuesday. And importantly, each grew at rates faster than Facebook, which blamed supply-chain constraints and Apple’s privacy steps for the deceleration in its advertising revenues.

Coming on the heels of a similar supply-chain grouse by emerging digital-advertising platform Snap during its third-quarter earnings release last week, some observers feared ad spending might also be facing a slowdown.

“Investors' advertising-growth anxiety is growing with reports of supply chain challenges, but neither [Omnicom] nor [Interpublic] suggested it was material across their businesses,” BMO Capital Markets analyst Daniel Salmon wrote in a note sent to investors on Tuesday. Salmon added that “new platforms like CTV, new categories like sports gambling, strong NFL ratings, and continued demand for live sports create a relatively consistent outlook for these companies, versus volatility expected across mobile ad-oriented Internet this quarter.”

While the most recent data from Standard Media Index’s U.S. Ad Market Tracker for the month of September does show the rate of ad spending expansion may be decelerating -- it nonetheless remained in the double-digit growth phase, rising 10.2% versus September 2020. But that’s down from far more pronounced rates of growth earlier this year, which were compared with massive declines for comparable months in 2020.

The reality appears to be that some disruptive factors -- what Wall Street likes to refer to as "headwinds" -- are impacting some big digital advertising suppliers more than others, and do not appear to be systemic.

And while supply chain issues do not appear to be slowing down ad spending growth, most ad economy watchers will be keeping a close eye on Amazon's third quarter earnings release Thursday, because it does appear to be having a material impact on retail sales, especially for ecommerce platforms.

"We expect ecommerce companies to address ongoing supply chain disruptions, with a focus on the potential impact to product availability as well as margins, as the cost of sourcing product from overseas increases," Raymond James analyst Aaron Kessler writes in a note sent to investors Tuesday.

"We believe that companies with the most scale (i.e. [Amazon]) are best positioned given they have the capital to invest in flying products or to shift to other ports," he notes, adding, "Furthermore, companies that deal with larger, heavier items like furniture (i.e. Wayfair) are more likely to be impacted vs. those sourcing smaller items. Additionally, we believe worker shortages and rising labor costs will be key topics this quarter." 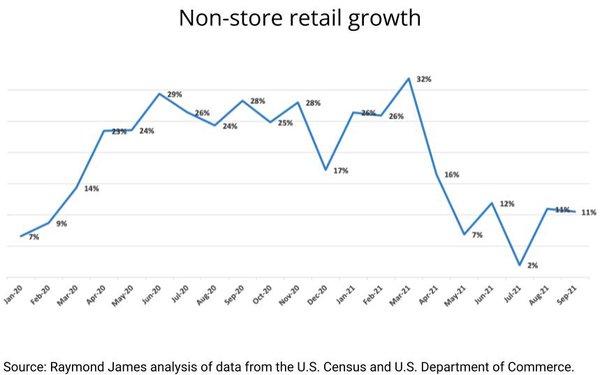