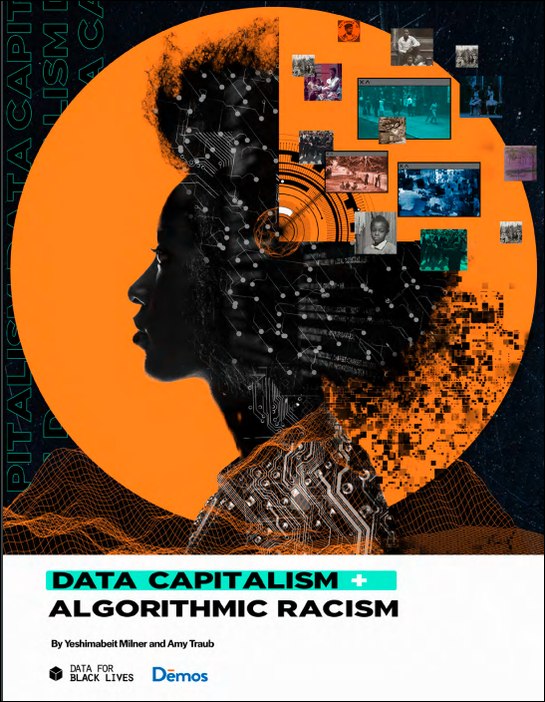 The report defines data capitalism as an economic model rooted in slavery. It relies on the extraction and commodification of data and the use of Big Data and algorithms to consolidate power and ultimately increase inequality in the U.S. along lines of race, class, gender, and disability.

“Data capitalism is at the root of American inequality,” asserts Lebaron Sims, associate director of policy and research at research group and think tank Demos. “It dates back to the origins of our financial system and our economic system...at the foundation of the country.”

“An accurate accounting of value -- the dollar amount that's assigned to a human life -- undergirded so much of the American economy,” Sims adds, noting: “From the nascent financial or insurance industries to the actual accumulation of wealth and the development of cities throughout the South, and commerce moving up north.”

These institutional business practices and patterns, originally created for slavery, are still present in the algorithms and equations used to calculate the value of a human life -- the consumer, or worker -- in today’s market, the report argues.

“We see now with Big Data, with these tech companies that have monetized human behavior, even to the point where they're tracking biometrics –– actual physical human attributes––that this business is bigger than ever,” said Sims.

Big Tech evolved through hundreds of mergers and acquisitions. Now we have -- as Wired aptly put it last week in an article about the supposed metaverse, “these few supermassive players controlling and appropriating the celestial motion of billions of users.” An increasing number of Americans currently support government regulation on Big Tech and feel less positive about the effects of companies like Meta (previously Facebook), Amazon, and Google, on the country, according to a recent study from the Pew Research Center.

“Amazon is the perfect encapsulation of racial capitalism,” said Sims. “I think Bezos's world view when he founded Amazon was that people are naturally lazy, and they need surveillance and coercion and threats not just to perform their work, but so that you can extract every amount of value from them, from their physical labor.”

This is put into stark relief based on the demographic information of Amazon’s workforce, as the company’s highest-paid jobs are mostly held by white males, while many lower-paying jobs in Amazon’s warehouses and delivery vehicles are filled by minorities.

Widespread reporting on Amazon’s dehumanizing (the singular 15-minute break; being fired by an app), unfair, and outright dangerous working conditions are put into a more purposefully sinister context when connected to algorithmic racism.

“The algorithms that govern life in these warehouses force people to exert themselves, and use every last bit of themselves, in ways that...aren't designed to be sustainable,” said Sims in relation to Amazon’s high injury rates among workers.

According to the report, sustainability is only prioritized at Amazon in the hoarding of monopoly power. In 2019 there was speculation that Amazon’s search algorithm was biased, privileging its own versions of specific goods. The company’s public denial depicted how difficult it is to uncover the truth behind such a powerful corporation.

The Atlantic dubbed this issue “strategic ignorance,” explaining that algorithms lack transparency and can therefore “privilege or discriminate without their creators designing them to do so, or even being aware of it.”

In March 2019 Facebook was found guilty of selling “pre-populated lists” to advertisers who were then able to place housing, employment, and credit ads that could “exclude” African Americans, Hispanics, and Asian Americans. This is the type of predatory behavior that Demos sees as inevitable without making Big Data transparent, widespread regulation, and the breaking up of Big Tech.

“What we need are oversight boards, oversight committees that involve the public, that make these things more transparent for folks so the public can understand what it is that they're trading in this bargain,” he concludes.