The Pronoun Is The Message In Transgender Awareness Campaign 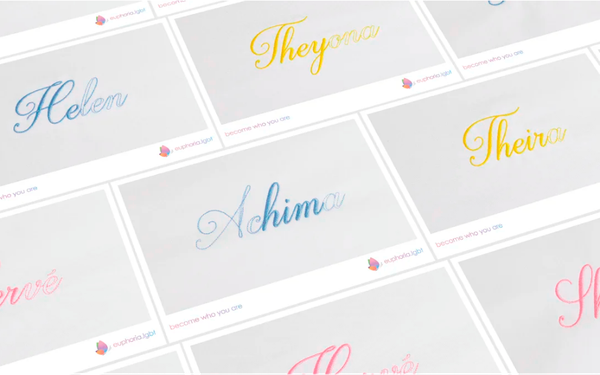 In preparation for Transgender Awareness Week (November 13-19), Euphoria -- a platform dedicated to the journey and well being of transgender people -- teamed up with creative agency Fred & Farid Los Angeles to develop its first-ever brand campaign.

Sometimes the pronoun -- she/her, he/him, they/them/their -- appears to align or misalign with the original gender of the name.

Euphoria says the purpose of the campaign is to invite people to respect the transgender community and each individual’s unique ownership of their own identity.

“Pronouns are foundational elements of communication for every human being,” says Robbi Katherine, Euphoria.LGBT founder. “For the transgender community, pronouns offer an acknowledgment of one’s truest self. These words are often the first and perhaps the most enduring reflection of the transgender soul. Pronouns are more than just words -- they are portraits.”

Katherine started Euphoria in 2019 and has built it into “a tech ecosystem for the transgender community to alleviate the great pains associated with gender transition.”

Clarity, for example, is a “sense-of-self tracker” targeted toward people at the earliest stages of their gender transition. Bliss is a savings tool that helps users itemize their goals and save up more quickly. Windfall is a marketplace for trans artists; Solace provides general transitioning resources and information; Devotion offers messages of daily affirmation; and Catharsis, a mental and emotional health platform, is coming soon.

In addition to its new brand campaign, Euphoria created a company tagline, “Becoming who you are,” noting in a recent statement that “the quest of the transgender community to recognize, accept, and embrace their true identity is an inspiration for each of us to dare to become who we are.”

While Euphoria deems itself just one resource among many for transgender people, criticism of the platform comes in response to the nuances of the trans experience, and the trans community’s distrust of capitalist systems.

The platform, which labels itself a straightforward guidebook for trans people -- one that is backed by Chelsea Clinton and Gaingels venture investment syndicate -- faces understandable apprehension.

In the past year, mainstream brands have made clear attempts to reach the LGBTQIA+ market. According to Business Insider, Americans who identify as LGBTQIA+ have serious spending power –– estimated around $1 trillion –– and mainstream brands like Mastercard, Starbucks and countless others have taken notice with their marketing strategies.

However, there is a risk when some consumers think a brand isn’t actually aligned with a cause or community, but simply capitalizing on it.

Criticism of a brand’s goals has manifested, for example, around Pride Month, which brands have widely attached themselves to.