Why Mobile Probably Won't Be The On Ramp To The Metaverse 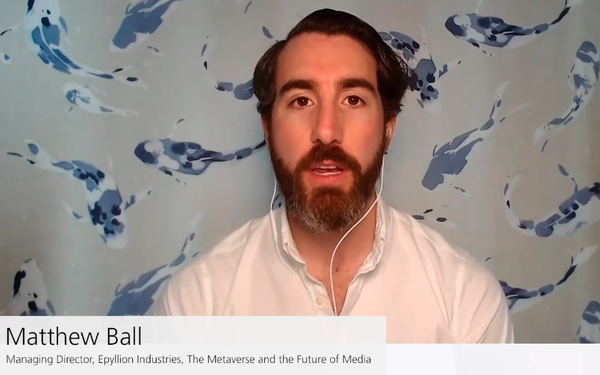 One of the highlights of this week's UBS "Media Week" conference was a presentation Wednesday morning by Matthew Ball on "The Metaverse and The Future of Media."

Ball, who is managing director of venture capital and consulting firm Epyllion Industries, is one of the smartest guys talking about the industries that will be the underpinnings of the metaverse, including the waves of computing, network computing, mobile computing and gaming that have led up to it.

The two big takeaways I got from his presentation are 1) the metaverse is inevitable (it's not a question of if, but when, by whom and exactly how they come together to do it); and 2) that it's not a matter of a simple progression from the mobile internet to a mobile metaverse.

The main reason for takeaway number 2,  he said, is that most of the technology currently powering the mobile internet still relies on the old-school fixed internet. At best, mobile will be a technology we use to access the metaverse, but it probably won't be the one powering it.

Also, the mobile technology we use to access it may not necessarily be in the form of a handheld smartphone, but likely will include other consumer hardware interfaces -- smart glasses, virtual reality, augmented reality headsets and other gizmos -- being developed by a wide range of players, Facebook parent Meta, and Apple.

The important part of Ball's scenario is that the metaverse won't be created by a single Big Bang, but instead be part of a series of overlapping technological progressions that will come together to produce something that may currently only exist in the eye and mind of Mark Zuckerberg, but will likely take on another form.

More to the point, it will likely take on many forms. And that, from a free market and innovation point of view, is probably a very good thing, because there likely will not be one dominant player -- either on the backbone side or the consumer interface side -- or, for that matter, the consumer experience end.

Ball likened the next few years of metaverse development to the "protocol wars" that took place during the early years of the fixed internet, which produced multiple proprietary ways of rendering content, communications, information and experiences, but which ultimately converged, for economic reasons, to create the fixed and mobile internet we know today.

And while mobile devices will most likely be the way many people access the metaverse, that will only be the part of the technology powering the relays from the nearest wireless tower, while the heavy lifting will still be taking place on fixed infrastructure. That said, Ball said, the rollout of 5G will greatly enhance what people can do between those towers and the immersive metaverse experiences to come.

For that reason, Ball doesn't think they will necessarily take the form of VR or AR, which may still require expensive hardware for consumers to justify, although those mixed-reality scenarios will definitely have application for "enterprise" users.

Instead, most consumers will likely experience something less than what Mark Zuckerberg has mocked up, and likely spends his nights fantasizing about. That will be more of a "rendered 3D" experience that will be sufficient for people to participate in the metaverse, which Ball defines as "a massively scaled and interoperable network of real-time-rendered 3D virtual worlds, which can be experienced synchronously and persistently and by an effectively unlimited number of concurrent users with a sense of presence."

Sounds good, right? But it was Ball's next statement that made me wonder why we actually need it.

"Of course, the real world has all of these attributes," he said, ticking off: "We persist. We're all sharing it. We're all live within it. Everything is interconnected in one way, shape or form."

So why the metaverse? And why now? Zuckerberg aside, Ball said it's because the technologies required to realize it are "starting to feel real."