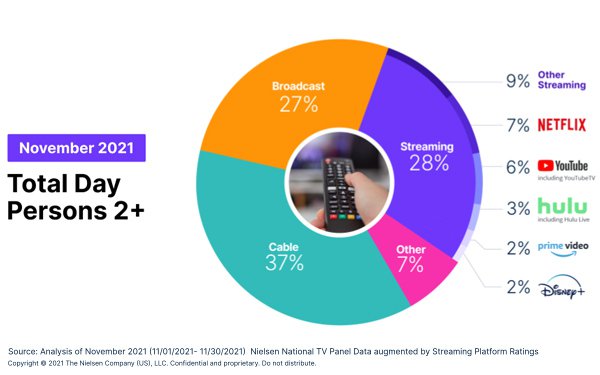 Looking at the longer seven-month view of “The Gauge” -- the relatively new Nielsen metric touting overall total TV viewing usage -- streaming platforms recorded a rise in share, and broadcast TV did too. Each gained by two percentage points.

Nielsen credits the increase in sports viewing for broadcast as a recent reason for the gain, as well as a rise in feature films on network television.

For streaming, it says Disney+ was higher as a result of more kids viewers and the release of movies "Shang-Chi" and "Jungle Cruise" in November.

Where did those four percentage points in total gains come from? Cable, in particular. While it still has a leading 37% share in total TV usage among persons 2+, cable TV is down from 39% in May.

The “other” category -- which contains un-measured video game usage, streaming through cable set-top boxes and DVD playback -- was also dinged, coming in at 7% in November, down from 9% seven months ago.

Looking specifically at those high-profile individual premium streaming platforms, there is a slight change for two of the major ad-free subscription streamers -- Netflix and Disney. Both added one percentage point over the seven-month period. Netflix is now at a 7% share, with Disney+ at 2%.

Others in the streaming category remain at the same level: YouTube, 6%, Hulu, 3%, and Amazon Prime Video, 2%.

In the “other streaming” category, which includes other high-bandwidth video streaming on TV that is not broken out individually, that group had a 9% share, the same as it was in May 2021.