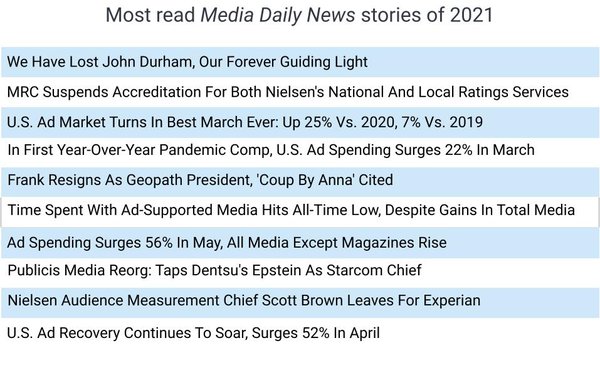 News about the recovery of the ad economy, shake-ups at media research suppliers, and media agency reorganizations were among the most-read stories on Media Daily News during 2021, but it was a touching op-ed tribute to the late digital media pioneer, professor and mentor John Durham by "Media Insider" columnist Dave Morgan that was the most-read story of the year.

"No one had a bigger impact or played a more important leadership role in digital advertising over the past 25 years than John Durham," Morgan wrote of Durham's legacy following his death on November 16. The column also was one of the most commented on and shared articles published by Media Daily News.

News of the Media Rating Council's suspension of accreditation for both Nielsen's national and local TV ratings services in September was the second most-read story of the year,

Most of the other most-reads were stories reporting on the U.S. ad market's recovery from the ad recession that began in 2020 due to the COVID-19 pandemic.