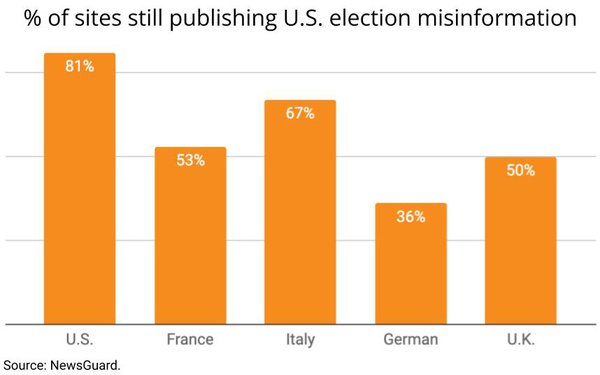 As the U.S. approaches the anniversary of the January 6 Capitol insurrection, an analysis shows most of the websites that had been publishing misinformation about the U.S. election are still active and they are continuing to be sponsored by hundreds of advertisers.

The analysis, released New Year’s Day by misinformation watchdog NewsGuard, found “892 major brands” have continued to finance sites publishing either election of “Jan. 6” misinformation over the past year.

While the report doesn’t disclose the identity of those brands, NewsGuard said there was a 32% decline from the number of brands sponsoring those misinformation sites a year earlier. But that also coincides with 19% drop in the number of U.S. sites publishing such misinformation.

NewsGuard also did not provide estimates for the amount of money advertisers have spent on those sites, but it cited a previous analysis it conducted by Comscore, which showed that advertisers overall spend about $2.6 billion annually funding sites that publish a variety of misinformation.

“The vast majority of the sites spreading election misinformation a year ago have continued to promote the narrative that the election was not legitimate, while defending, downplaying, or redirecting blame for the riot,” NewsGuard’s analysts note in the new report.