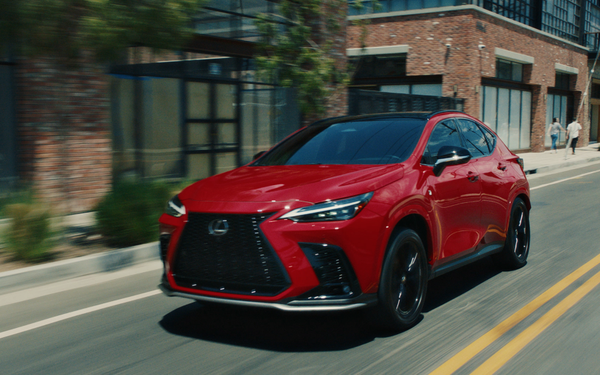 Lexus is using a heavily digital and streaming campaign to find younger buyers for its all-new 2022 NX.

The campaign features media partnerships with Twitch, 100 Thieves, Google and Roku and includes seven spots to reach a wide variety of audiences with a similar mindset.

The vehicle “reflects the bold direction we are taking the brand in the next few years,” Vinay Shahani, vice president of Lexus marketing. told a small group of journalists. “The NX is going to set the stage for the next chapter of the Lexus brand. We are counting on it, frankly, to bring in a younger buyer. These younger buyers are approaching luxury in a new way.”

Gen Y and Gen Z luxury buyers tend to be more diverse, more affluent and more interested in technology and innovations than ever before, he says.

The target for the NX is a Gen Y customer (with an average age of 41) that the brand calls “creative visionaries.”

“Gen Y in a few years will be the largest consumer of luxury vehicles,” Shahani says. “They are the most diverse generation we’ve ever seen in the United States. It’s important for us to speak in a tonality that’s going to resonate with them. So we are really projecting a very bold and confident image for the Lexus brand.”

“Hustle” depicts how the all-new NX prioritizes what matters for drivers, while “Get Ahead” shows how the car helps drivers navigate daily challenges. Both spots are from lead agency Team One.

Two from Walton Isaacson include “Elevate,” which features a pair of Black filmmakers who leverage the car's intuitive technology. “Defy” is focused on the Hispanic audience and illustrates a journey overcoming obstacles.“ Shine” illuminates the new NX and LGBTQ talent in a city of lights on a road full of possibilities.

“NX Level” juxtaposes the performance and technology of the new NX with humans' powerful athleticism. These two spots by the same name were created for East Asian and Asian Indian audiences by IW Group.

All spots end with the tagline: "Welcome to the next level."

TV ads will air during prime time and sports, including the Winter Games, March Madness and NBA. In addition to broadcast, Lexus will reach audiences through social videos featuring some of the broadcast talent, radio and digital. Out-of-home media will include airports, ride share, ski resorts and billboards.

Lexus is taking aspiring Twitch creators for a ride in a Lexus NX, where they will pitch their most unique stream ideas and let fans decide which creator will be given the opportunity to make their stream idea a reality.

Also on Twitch, Lexus will develop a graphic representation of 100 Thieves’ League of Legends Championship, which turned into a one-of-a-kind car wrap for a customized 100T x Lexus NX.

The brand is also partnering with Google for a custom cloud-streamed, AR experience for YouTube viewers.

Finally, the luxury automaker is enlisting Roku in what it says is "the largest awareness campaign ever" through the OneView platform, tapping into Roku’s proprietary first-party data to maximize omnichannel reach to traditional pay TV.