Super Bowl Advertisers Have An Advantage With NFL Audiences 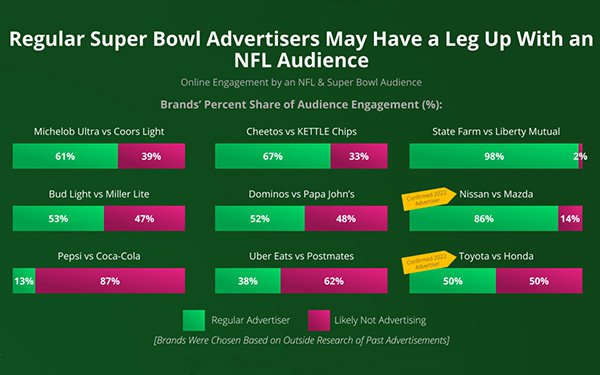 And while these two mega brands created a mega ad, they may not be the products that consumers are talking about across social media.

What are consumers talking about as it relates to Super Bowl LVI? ShareThis explored consumer conversation data to find out.

The insights include some of what people want and/or expect to see and what drinks and snacks they may purchase and share at gatherings and parties.

While the spot aims to shine a light on PepsiCo beverages for Super Bowl celebrations, it may not be the brands that consumers are talking about. It turns out that some of the top brands include Coca-Cola, Michelob Ultra, Cheetos, Bud Light, and Dominos.

In terms of on-field interest, the teams and players being talked about include the Kansas City Chiefs and the Denver Broncos.

The Chiefs were defeated in last year’s Super Bowl, and at this time, the Broncos, Packers, Titans, Chargers and Vikings are the highest-averaging week-over-week discussion leaders with just a few weeks left until the big game.

Tom Brady, age 44, along with the Chiefs’ Mahomes, Kelce, and Mathieu are favorites.

Online share of voice about musical performance is being led by Eminem, with 33% followed by Snoop Dogg, Kendrick Lamar and Mary J. Blige. Interestingly, the sentiment around Eminem is largely positive, while the others are experiencing a mix.