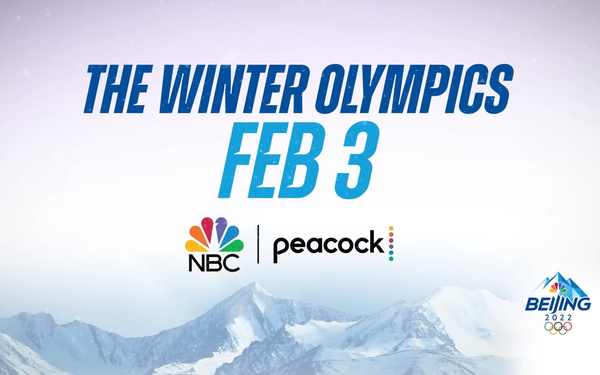 With just days before the 2022 Beijing Olympics is due to start, NBCUniversal continues to boost on-air TV promotional messaging, even as controversy swirls around human-rights issues by China, as well as lingering pandemic issues.

Around 3.02 billion impressions have been produced from around 12,157 mostly national TV airings of promotional Olympic spots since October 29, 2021, according to iSpot.tv.

The media value of those promotional spots is estimated to total $55.2 million.

NBC Television Network benefited from much of that promotion -- 1.4 billion impressions. Other NBCU networks also have been used in the campaign: USA Network was next (395.9 million impressions); Syfy (129.9 million); MSNBC (97.7 million); and Oxygen (91.0 million).

National TV live-plus-same day promo exposures produced 87% of the total impressions, with 7% coming from local TV, 3.2% from national plus three days of time-shifted viewing; and 1% from addressable advertising.

The bulk of the national TV impressions came from NFL Football programming, with “Sunday Night Football.”

For the 2021 Tokyo Summer Olympics, NBCU sold $1.8 billion in advertising, according to Comcast’s fourth-quarter earnings report released this week. Those Olympic games averaged only 15.6 million prime-time viewers, the lowest in decades for any Olympics.

The Biden Administration said it would be engaging in a “diplomatic” boycott -- meaning no U.S. officials would be attending the event -- due to concerns over China’s human-right issues, including alleged acts against Uyghur Muslims in Xinjiang.

With regard to COVID-19 issues, China will have strict daily testing protocols especially for athletes, including a “closed loop” residence housing village.

China is also severely restricting spectators' tickets made available to the general public. According to reports, toned-down expressions of spectator celebrations will be encouraged. Spectators will be urged to clap at athletes' performance rather than cheer or shout to prevent the spread of COVID-19.