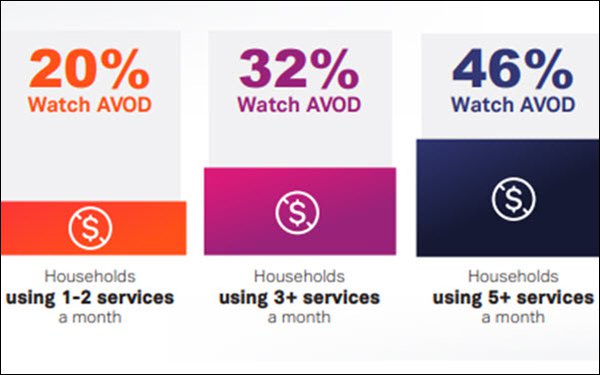 "This trend is likely to continue, and will close the approximately 5% gap between AVOD and SVOD market penetration, surpassing SVOD in early 2022," the report predicts. "AVOD adoption will continue to grow, thanks to ubiquitous hardware, cord cutting, subscription fatigue and increased broadband access."

In addition, advertising spend in connected TV (CTV) and over-the-top (OTT) rose 34% last year, versus 7.4% for national broadcast and cable, and is forecast to become the fastest-growing video format as of this year, per Magna data cited in the report.

According to Tubi's own research, Americans spend $65 a month on about 4.2 streaming subscriptions (including TV streaming packages) — and as the number of streaming services grows, so does the probability that any new service added to the home will be free.

Having three or more services appears to tip the odds in favor of adding AVODs (see infographic above).

But saving money isn’t the only driver of AVOD growth.

Initial AVOD adoption was led by the young — who still over-index in comparison to the general population — but free-streaming viewership is expanding rapidly among educated and higher-income earners and becoming more reflective of national audience averages, according to Tubi.

The Tubi report — which in addition to general industry data touts the service’s own stats to pitch its benefits to advertisers — reports  that Tubi saw double-digit growth in all audience segments over the past year, with the most growth among college-educated and affluent ($100,000+ HHI) demos. That, it says, puts the audience on par with U.S. national averages.

Streamers continue to gravitate to specific AVOD services as their “television of choice,” while being selective about the services for which they pay a premium, according to Tubi — which says that 27% of its own users can’t be reached on any other major AVOD service, but 71% subscribe to (ad-free) Netflix.

Factors that determine AVOD choices within the increasingly crowded marketplace include ease of use, content, personalization and user experience. In fact, with AVODs, ease-of-use factors somewhat outweigh content, says Tubi.

And while a variety of studies have shown streaming users becoming more accepting of advertising, 82% of marketers state that ad frequency management is an important factor in choosing streaming platform partners.

For the Tubi report, MarketCast conducted an online survey of 6,003 adult streamers over 18 years of age in Q4 2021. The report also cites data from sources including MRI, Advertiser Perceptions, Kantar, MRI-Simmons, NinthDecimal and TVSquared.