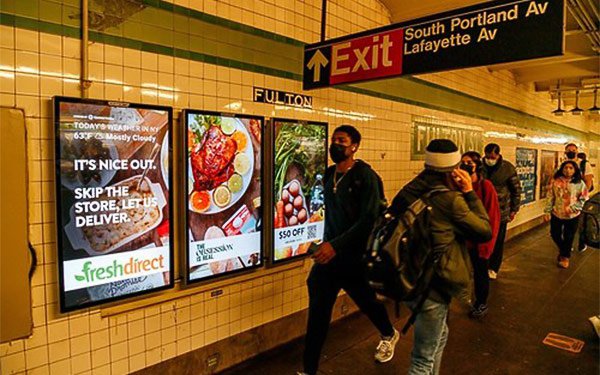 Geared to New York City subway riders, the campaign delivers recipes and a user-friendly message to a 3 million weekday audience in Brooklyn, Manhattan, Queens and the Bronx.

The campaign was produced and sold by Quan Media Group, the OOH agency of record for FreshDirect. It runs through March 20.

Fresh Direct also teamed with Outfront’s Moments-in-Food partner So Yummy! to sponsor four 15-second video branded-content segments focused on timely seasonal recipes to engage commuters. Each video includes a QR code to link commuters to the FreshDirect site, where they can buy the ingredients featured in the branded spots.

The creative ad units are designed to send messaging based on the latest weather conditions. A specific recipe is tied to the forecast.

Outfront connect brands with consumers via one of the largest billboard, transit and mobile assets in North America.

John MacDonald, Chief Marketing Officer, FreshDirect, said: “As a great local New York city brand for 20 years, FreshDirect has been meeting our customers where they are, delivering the highest quality, fresh food to their doorsteps. This campaign enables us to reach them beyond their doorsteps and at various points of their daily commute throughout the city.”

FreshDirect has provided digital shopping and delivery services, primarily in the metro New York area, for two decades. The online grocer has also expanded to select markets in New Jersey, Connecticut, Pennsylvania, Delaware, Maryland, Virginia and the District of Columbia.