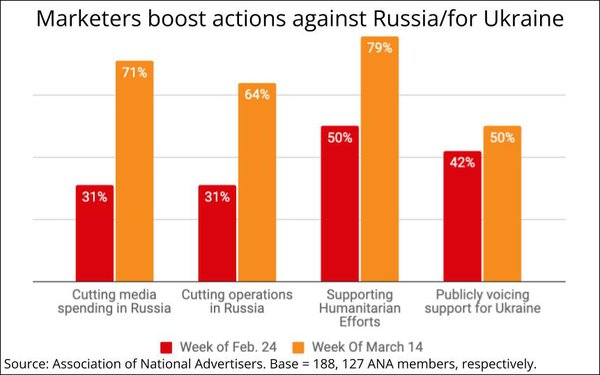 The biggest U.S. marketers have expanded their efforts to use their commercial marketplace power to combat Russia's invasion of Ukraine, according to findings of a new survey from the Association of National Advertisers (ANA).

The survey, conducted the week of March 14, finds that 71% of ANA member respondents currently doing business in Russia say they have suspended or reduce their media spending in Russia, which is more than double the 31% who said so when the ANA last surveyed them after the February 24 invasion.

"At the same time, 64% of those responding to the new survey said they were 'ceasing or scaling back operations in Russia,' compared to 31% who indicated they planned to do the same in the first survey, an increase of 107 percent," the ANA noted.

The ANA said there also was a sharp increase in the percentage who said they were supporting humanitarian efforts in Ukraine: 79% vs. 50% in its earlier survey.

Lastly, the ANA said more marketers are leaning into the conversation by "publicly voicing support for Ukraine:" 42% vs. 19% in the first survey.

“As the war in Ukraine continues to intensify, it’s clear that the resolve among the marketing community to band together to protest this inhumane invasion is stronger than ever,” ANA CEO Bob Liodice said in a statement, adding: “Every day marketers are not only voicing their concern, but also taking direct action by radically altering their presence in Russia. The ANA urges them to continue their humanitarian efforts in showing their support for the people of Ukraine.”