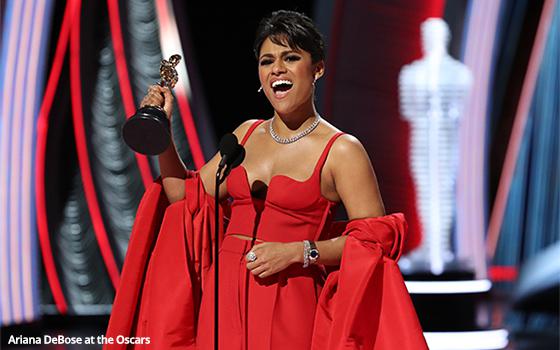 With the Oscars back at its regular venue, The Dolby Theater -- and some impromptu onstage drama -- ABC's "94th Academy Awards" witnessed a surge in viewership versus a year ago, up 56% to a Nielsen-measured 15.4 million total viewers.

The key 18-49 demographic also rose this year by around the same percentage level -- to a 3.2 average rating from a 2.1 a year ago.

But even with its recovery this year, the Oscars TV event on ABC is still below pre-pandemic levels, when it regularly delivered 20 to 30 million viewers in recent years.

Some of the 2021 drop can be attributed to COVID-19 pandemic-related disruptions. The Oscars that year was offered as a lower-key, less-glitzy presentation held at the Union Station, a major rail station in Los Angeles.

In 2020, the Oscars was held at its regular date in early February, before pandemic-related disruptions started in mid-March that year, and it earned 23.6 million Nielsen-measured viewers.

This year's Academy Awards was heightened in a big way when, in an impromptu moment, actor Will Smith walked onstage and slapped comedian Chris Rock after Rock made a joke about Smith's wife Jada Pinkett Smith. Minutes later, Smith won the award for Best Actor for “King Richard,” and tearfully apologized for his actions.

As an advertising category, streaming services collectively had the most share of impressions overall in the show -- with a 20.5% “share of voice," iSpot.tv said. Wireless advertisers were next at 8.7%, followed by consumer software/apps with 5.9%, automotive at 5.7%, and theatrical movies at 4.6%.

Disney-owned Hulu (sister company of the ABC Television Network) posted the biggest individual share of impressions with a 10.3% number. Next was Verizon at 8.7%, followed by Disney+ at 4.4%, Crypto.com with 3.0%, and Velveeta at 3.0%.

Thirty-eight percent of Oscar commercials came from media and entertainment marketers -- up from 24% in 2021, MediaRadar says.

Although Apple Original Films' "CODA" won an Oscar for Best Picture -- the first streaming-originated movie to win the coveted award -- Netflix’s "Don’t Look Up" garnered more viewers than any film nominated for Best Picture on a streaming TV service through March 20 of this year, according to TV measurement company Samba TV.

"Don’t Look Up" posted 10.4 million viewers over a 10-month period on the streaming service. Next came "Dune," which appeared on HBO Max, posting 5.3 million viewers for its entire run so far -- just over five months.

Netflix’s "The Power of the Dog" scored 3.4 million viewers over a three-and-a-half-month period, while Hulu’s "Nightmare Alley" came in at 3.1 million (over three months), followed by HBO Max's "King Richard" at 2.6 million (two-and-a-half months) and Apple TV+'s "CODA" at 973,000 (just under one month).