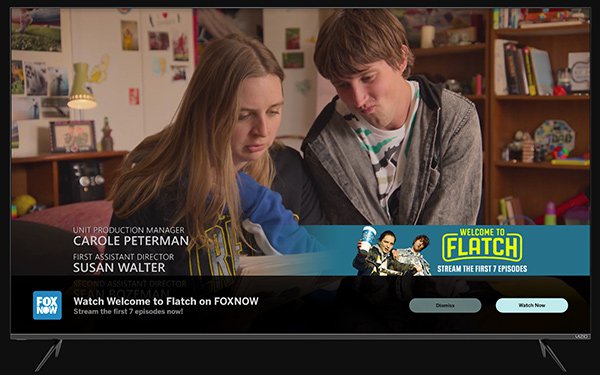 Smart TV manufacturer and advertising platform Vizio is starting up a new type of TV ad format -- one that links linear TV viewing to a smart TV app platform.

Called Jump Ads, it allows programmers and marketers the ability to give an option to consumers -- at the end of linear TV program -- to jump to supporting apps through Vizio’s SmartCast operating system to continue their smart TV viewing.

At the end of the premiere episode for its new docu-comedy “Welcome to Flatch,” a Jump Ad will prompt viewers to continue watching additional episodes of the program or catch up on past episodes on the Fox Now app.

An "overlay" gives viewers the option via their remotes to move on to more episodes onto a streaming app.

Fox is streaming the first seven episodes of the season on-demand the same day as the launch of the show.

Vizio cites that 60% of viewers are frustrated with the process of navigating between different streaming services and apps, according to Accenture. Jump Ads make for an easy transition.

For TV networks, they can choose at what point in the show the ads will appear, and how often.

Vizio says it is working with other content providers and marketers on a variety of integrations.